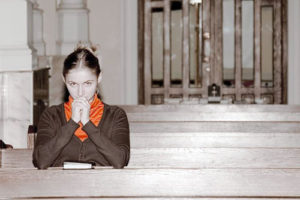 Most churches have a blind spot when it comes to singles. We’re pretty good at supporting families. If you want to become a better father or mother or a more godly husband or wife, we’ve got you covered. We’ve got classes and books and sermons and small groups and support groups and tons of volunteers. But a lot of the time we don’t know what to do with unmarried people except try to force them into one of those frames. We don’t do a great job with this.

Today, for the first time in the history of the U.S., less than half of all adults are married. More and more people are staying single and staying single longer. And nobody thinks these trends are going to change. It’s way past time for us to have a better theology and a better practice when it comes to the unmarried. We need more faithful beliefs and actions as it relates to singles.

Like prayer postures. The Bible tells us to pray with our hands raised, to pray standing up, to pray on our knees, to pray flat on our faces. But the way we most often pray is the only way not mentioned in Scripture: sitting on our rear ends! We ignore the biblical teaching; we act like it’s not there. Like almost every sentence in the Sermon on the Mount. We ignore it.

There are huge chunks of 1 Corinthians 7 we just flat-out ignore. We pick out the parts on marriage we like. We index and proof-text and take out of context a lot of it. But there are huge sections of it we never address. Like the very first verse:

“It is good for a person not to marry.”

The apostle Paul, inspired by God’s Holy Spirit, wants all Christians to remain unmarried. Singles, widows, divorced — he says everybody who’s single ought to stay single. And he doesn’t just say it once:

“About virgins… I think that it is good for you to remain as you are. Are you married? Do not seek a divorce. Are you divorced? Do not seek a wife… Those who marry will face many troubles in this life, and I want to spare you this.” (7:25-28)

“I am saying this for your own good, not to restrict you, but that you may live in a right way in undivided devotion to the Lord.” (7:35)

“He who marries the virgin does right, but he who does not marry her does even better.” (7:38)

This whole chapter urges Christians to be single. Paul certainly permits marriage; it’s not a sin to get married. But Paul claims it’s best to be single.

Paul is single. He’s not married. And because he doesn’t have a wife or any children, Paul is able to risk his health and his safety and even his life to spread the Gospel. By the way, spreading the Gospel is the most important thing to Paul. So it’s not surprising that he would recommend to his churches that, if you’re unmarried, you should stay that way. We would expect that from Paul.

But this idea of voluntary singleness? We don’t get it. Voluntary celibacy? What? We pass that off as some kind of first century weirdness and we move on to other verses because the only reason we’re in 1 Corinthians 7 is to argue about divorce.

But we’ve got to come to grips with this. Paul thinks it’s better to be single.

But not everybody’s married.