The Gospel is for All

So, what was Jesus trying to show us in these sermons? What does he want us to know about God and the eternal Kingdom of God? What are we supposed to see?

I think Jesus’ main point in all his sermons is that the Kingdom of God is for everybody. The Gospel is for all. It was a radical idea then, and it’s still very much a dramatic idea today.

In his very first (and, I assume, last) sermon in his hometown synagogue in Nazareth, Jesus preached that the Kingdom of God was for all

people. He reminds the listeners that there were many poor widows in Israel during the great famine, but Elijah didn’t feed any of those good Jewish women. He only fed the one alien woman of another nation and race. He points out that there were lots of suffering lepers in Israel, but the only person Elisha healed was a violent, non-Jewish army officer of the occupying Syrian forces. Jesus preaches that, yes, God has come. But he’s not really come in exactly the ways you expected. God really enjoys working the other side of the street.

This sermon and all the others like it didn’t go over so well in front of congregations full of people who believed they were the only ones who had gotten it right. When Jesus says God is doing a new thing, it doesn’t fly with a bunch of people who are holding tight with a white-knuckle death grip to things that are old.

The Kingdom of God is for everybody. That’s what Jesus wants us to see.

Jesus made friends with the poor and oppressed. And we celebrate that. But he also made friends with the rich and the oppressors. And that’s maddening to us because we’re always trying to divide the world up between us and them. Good and bad. Worthy and unworthy. Called and not called. Those who might accept the Lordship of Jesus and those who never will. Those who are a good investment of the church’s money and energy and those who would be a waste of the church’s time and resources.

Jesus wants us to see that his Kingdom is for everybody. Everybody! The curtain is torn! The walls are down! The barriers are destroyed!

That’s the message. It’s what Jesus preached. It’s what he lived. And it kept him in hot water. It got him disfellowshipped from his home church and nearly killed. 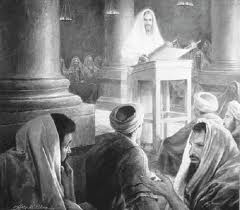 Jesus calls us to speak and to live this same message. We spread this word around liberally. Lavishly. We live it out with others generously. Abundantly. We forgive. We love. We share. We help. We compliment. We bring the gospel to everybody without reservation. We treat everybody like Jesus the Christ came to this earth to save them. We treat them like the Kingdom of God is for them. We speak to a mean neighbor like they belong in God’s Kingdom. We talk about the terrorists like God loves them. Like the rain that falls on the just and the unjust, whether they want it or not, whether they ask for it or not, whether they accept it or not, here it is! The love of God. The forgiveness of Christ. The mercy of the Holy Spirit. Freely and joyfully we proclaim and live the good news of God’s Kingdom with all.

Because that is God. That is the Kingdom of God. It’s the truth. And if we live it, it will truly set us and everybody we know free.