The Back of the Line

“Thanks be to God who always leads us in triumphal procession!” ~2 Corinthians 2:14

The apostle Paul writes while enduring great anxiety over his brothers and sisters in Corinth. He writes to give them a new perspective. He writes to bolster his own strength and faith. He writes about a great Roman military victory parade. The conquering general rides in a gold chariot up front. The senate and magistrates follow. Behind them are the royal and military musicians. The spoils of war, the loot from the conquered lands, is paraded next. And then the captives in chains, the prisoners of war, in the back of the line.

But the technical nature of the term and the linguistic nature of the verb can only mean one thing: Paul is not at the front of the parade with God. He’s at the back of the line with the captives.

Paul sees himself as a slave to Christ. He’s been captured by Christ, he’s a trophy belonging to Jesus, he’s one of the spoils of God’s great victory over sin and death. Paul is thrilled to be in the metaphorical chains of the conquering Christ and the unstoppable Kingdom of God. Paul shows us in a very graphic way his understanding of Christian ministry. He paints a vivid picture of himself — a picture of all of us — being led by Jesus in a long line to our own suffering and death.

See, the captives are the physical evidence of the victory. The conqueror receives the glory and honor due him when the world sees the people he’s defeated. The people at the back of the line, the conquered people in chains, are a display of and a testimony to the glory and majesty and power and authority of the conqueror in the gold chariot up front.

That’s Paul. That’s us. That’s the way he sees things.

“It seems to me that God has put us apostles on display at the end of the procession, like men condemned to die.” ~1 Corinthians 4:9

Paul goes on in that 1 Corinthians 4 passage to say we are humiliated. We’re ridiculed. We are the objects of great wrath and scorn. We’re spit upon by the crowds as we walk to our executions. 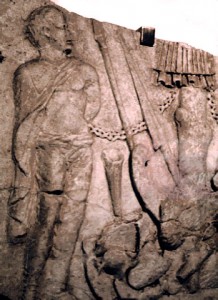 Things don’t always look so good from the back of a line like this. It doesn’t always feel good. Sometimes it’s downright painful.

But this is exactly where our Father wants us. God doesn’t want us better; he wants us deader! Dead to ourselves! Dead to the world! Completely dependent on God! Totally leaning on him for every step, every move, every breath! Wholly reliant on him for life itself!

Paul counts it as a blessing and a privilege to be led by Christ as his captive, as his slave, and to participate in this way as a part of God’s triumph. Paul has actually grown comfortable at the back of this line. He’s come to understand that “the all-surpassing power is from God and not from us.” He knows that “all of this is from God” and none of it is from his own strength or smarts. He knows that “our competence comes from God.”

Those are the lessons learned from the back of the line.

And that’s precisely where ministry is done. From the back of the line. God is glorified in his captured people. He is praised and honored by his slaves. May we stop wrestling with the chains and fully embrace them in complete submission to our Lord and King.