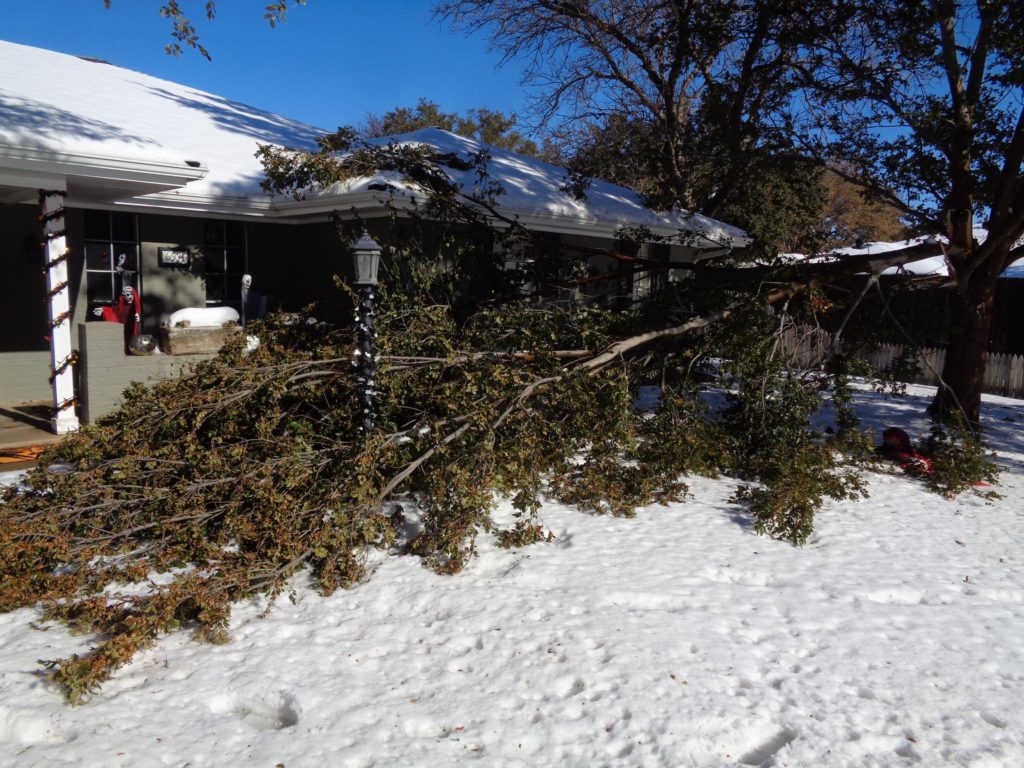 I joked with my friends in Edmond/ OKC today that if they would just move to Amarillo they wouldn’t have to worry about losing branches because we don’t have any trees here. That’s obviously not true. I’m not even sure it’s that funny.

We lost about a fourth of the biggest tree in our front yard last night when the weight of three days of ice and snow became too much. We hadn’t been out of the teens and 20s since Sunday evening and we had experienced three straight days of deep freeze temps and a constant wintry mix of precipitation. Light snow, sleet, freezing rain, freezing mist — it fell for three days and just kept accumulating on the tree branches that were still full of leaves. It’s not supposed to do this in October! 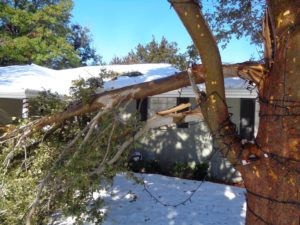 I was worried about all our trees, but especially this one on the east side of our front yard. I don’t know what kind of tree it is — the leaves look like Chinese Elm but it’s not and the branches look like Hackberry but it’s not — but the branches were sagging big time. I checked on them through the kitchen windows every couple of hours and fretted that I couldn’t do anything about what might or might not happen. They were predicting 5-8 more inches of snow last night before the slow-moving system finally cleared the Panhandle. That’s what concerned me. It looked 50-50 on whether we would lose the whole tree or not suffer any damage at all. I couldn’t tell. We’ve not been in this situation before. Ever.

The blizzard hit at about 6:00pm and lasted about four hours. A classic Amarillo snowstorm: big, wet, fat flakes blowing sideways and sticking to everything. By 7:00 I knew we were in trouble. I spent about 20 minutes in the worst part of the storm with a long rake, trying to knock the snow and ice off the branches of the trees in the front yard and the back. I spent the most time and paid the greatest attention to this one tree that looked like it couldn’t take another five minutes. All the major branches were bowing and sagging to within three feet of the ground. I must have looked like a fool out there, but I managed to knock enough snow off the branches that they were about seven or eight feet off the ground.

At 10:15, as Carrie-Anne and I were getting ready to go to bed, we both stood at the window and looked at the tree. The branches were about halfway back to where they were before. I said, “They look so heavy.” It was still snowing. 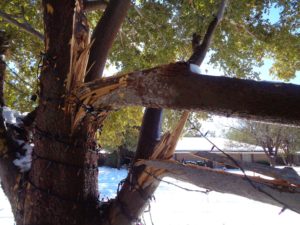 It looks like we got around seven additional inches of snow last night during those four hours. And it was too much. Thankfully we only lost that one big branch. This is nothing like what they’re suffering in Edmond this week where my sister Rhonda lost almost every single branch off every tree they own — nothing but bare trunks in their once beautiful yard.

Today the sun is shining for the first time in about a week and it’s climbing into the upper 40s. Clear skies, no wind — it’s an absolutely beautiful October day and everything’s melting. Almost melting too fast. The streets and sidewalks are flooding all over southwest Amarillo, cars are getting stuck in rushing water on Bell Street and 45th.  And I’m shoveling our driveway that is always too big after a snow.

I’m grateful we only lost about a fourth of the tree. It’ll be fine. I’m thankful it mostly missed the house — just a nick or two, it looks like, to a few shingles and the gutter. The skeleton-ghost thing I had hanging in the tree survived. And now I’ve got something to do on Saturday when the temperature is supposed to be near 70.