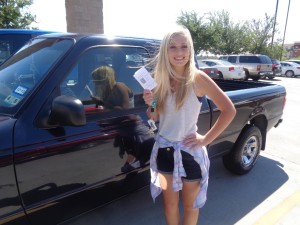 Turning sixteen is one of those magic moments in a person’s life. It’s not quite a watershed, it doesn’t change everything. But it’s highly significant. At sixteen, it seems like you’ve finally moved beyond the troubling middle school and Freshman years of uncertainty, the awkwardness of searching for yourself and forming an identity. It seems that, at sixteen, you’ve finally figured out a few things and are well on your way to knowing who you are and where you’re going. There’s more confidence at sixteen, more assurance, more stability. At least, that’s what it looks like on the outside. Inside the brain and heart and emotions of a sixteen-year-old girl, I really have no idea. I’m only guessing.

She passed her drivers license test this morning. The State of Texas has determined that she’s ready mentally and physically and has the skill set to drive a motor vehicle on the public roads. Today, Carley inherits the 2002 Ford Ranger, the little pickup all three of our girls have now used as their first car. She’s already purchased a new steering wheel cover and a license plate frame to personalize it just for her. A little more bling than it’s ever had. It’s hard to believe that when we first bought it brand new, all five of us could fit in that tiny thing at the same time. Since those days it’s had the back bumper replaced twice, the front bumper and grill replaced once, one quarter panel repaired, one windshield replaced, and it’s been totaled by the insurance company due to hail damage. Come on, Carley; you’ve got to make this thing go at least three more years. 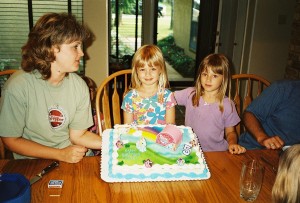 Carley’s always been our most athletic daughter and she’s becoming more so all the time. This week, Carley finished just three strokes off from representing the Canyon High School girls golf team at this weekend’s tournament. Until four months ago, she had never picked up a golf club in her life! She’s close, really close. And I’m very proud of her for being so determined to start up something brand new and work so hard at it like she’s done. She’s very talented. And competitive. She plays ping-pong like a crazy woman. She wants to race everybody all the time. She wants to punch me and kick me and pretend that I can’t still take her down and out anytime I feel like it.

She’s also pretty stinkin’ smart. Straight A’s. Every report card, every time. Right now she’s in the Top 20 in her sophomore class and has designs on Top Ten and higher by the time she graduates. She can pen a beautiful poem, raise and show a rabbit for the FFA, ace a physics exam, and build a paper mache’ elephant in the same week. She’s brilliant.

And she’s funny. She’s become a Seinfeld and Simpsons freak; a girl after my own heart. She notices things that are subtly humorous or ironic that not everybody appreciates. And she points it out. She sees the folly in presidential politics and daytime TV. She has an affinity for Airplane! and Naked Gun. She makes weird faces and strange noises with her friends. And sometimes in her room by herself. 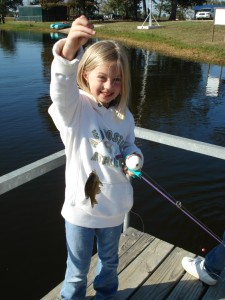 Those things all make me smile. I truly enjoy her company. I love doing things with her because I know we’re always going to laugh. I have to sit by Carley when we go to a choir concert or a school play or some other social function because we always wind up laughing together about things nobody else around us can get. It thrills me to read her writings, I’m inspired by her art, and I can’t wait to watch her play golf.

For all those blessings, I’m thankful. Carley fills my life with joy and happiness.

But the thing that gives me pause, the thing that makes me stop and reflect, is the fact that, like it or not, she’s not a little kid anymore. She’s not. Carley has become a beautiful young lady. We’re in a weird transition together now. She’s learning how to be an adult and I’m learning how to treat her like one. We’re not there yet — neither one of us. But we’re in that transition.

And I thank God that she has her eyes on him as we do this. Carley is more focused

on her Lord, more interested in his mission, more in tune with his will for her life and his creation than she’s ever been. She’s taking leadership roles within the student ministry and in our congregation. She’s active in our covenant group with an intergenerational mix of different backgrounds and experiences. She’s asking the questions. She’s singing the songs and praying the psalms. She’s in the Word. Our Christian faith is becoming hers. And it’s really cool to watch.

I love you, Carley, and I’m so very proud of you. Sometimes you’ll make a face or do something that causes me to see you as a first grader. I see you as that super cute five- or six-year-old with the perfect eyebrows and snaggle-teeth. Other times you’ll say something or react in some way that causes me to see you for where I imagine you’ll be in college in the next four or five years or married or working somewhere in your 30s. I see you as grown up. You’re on your way, sweetie. You’re running your race. And you’re doing it very well.