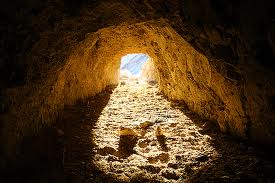 The resurrection of Jesus proves that this difficult way we wrote about yesterday is the right way to live. We believe this, yes? We’re committed to it. We know that the more we talk like Jesus and act like Jesus, the more we behave and respond like Jesus, the more naturally we’ll come to consider the needs of others more important than our own. The more we’ll sacrifice for others and serve others and show others unconditional grace and love. This is definitely the only way to live.

And for a couple of days it looked like the world was right and the Jesus Way was wrong. The world’s way was the right way to live and this opposite Jesus Way? Ha! He’s dead! He’s not the Son of God, he’s hanging on a tree! He’s cursed by God! He’s not the promised Messiah, he’s no representative of God to tell us how to live! Duh! He’s dead!

“Christ Jesus was declared with power to be the Son of God by his resurrection from the dead: Jesus Christ our Lord!” ~Romans 1:3-4

No, our Lord says turn the other cheek, forgive without limits, walk the extra mile, give up your coat, love your enemies, and pray for those who persecute you because that’s the way of our Father in heaven. The resurrection proves that it’s the right way to live, that it’s our calling. That’s the reason we exist — to live this very difficult, counter-cultural, other-worldly way and to be raised, to be vindicated in the end by the Creator of Heaven and Earth.