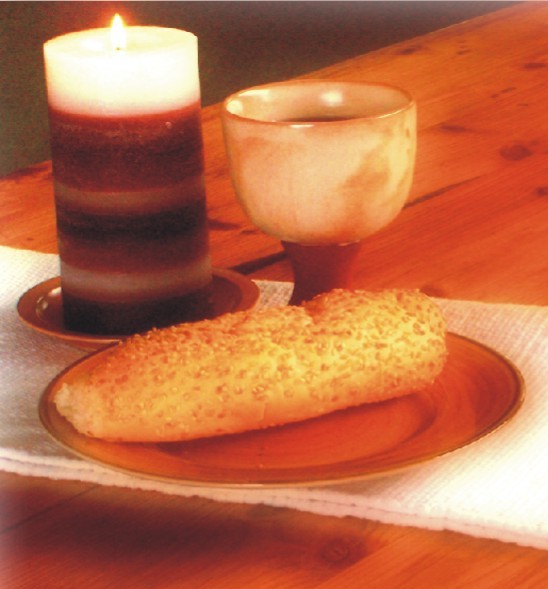 “Whenever you eat this bread and drink this cup, you proclaim the Lord’s death until he comes.” ~1 Corinthians 11:26

What happens when somebody dies? How do we feel? How do we act? What do we do?

We may be sad because of the loss or we may feel a sense of joy because of a prospective inheritance. In the case of a particularly tragic death, we may feel fear mixed with love. The death of a great poet or artist may result in feelings of deep respect. When an innocent person dies we may react with protests or vows of revenge. The convictions and deeds of a great leader may be so confirmed and endorsed upon his death that they actually radiate to later generations. People may celebrate the death of a tyrant by dancing on his grave.

Death can mean many things. And many can be our responses.

But none of those above mentioned actions and reactions express exactly what Paul means when he says “proclaim the Lord’s death.”

For Paul, the death of Christ was and is good news. It’s great news! And it is to be proclaimed with great joy.

When Paul describes the death of our Lord as a sacrifice, he’s telling us that the crucifixion is God’s greatest gift to humanity. “He who did not spare his own Son , but gave him up for us all — how will he not also, along with him, graciously give us all things?” (Romans 8:32). “God presented him as a sacrifice of atonement” (Romans 3:25).

To do that during the Lord’s Supper means that we are to express the pleasure and the joy that come as a result of the crucifixion. To proclaim means to announce publicly and clearly — not to whisper or remain silent — what has happened because of Jesus’ death and the meaning of that death. The table is an occasion and a practical form for showing and confessing that Jesus’ death is totally different from a natural event, a criminal act, or a tragic loss. It is not a reason or a place to cry or moan.

Markus Barth, from his 1988 work Rediscovering the Lord’s Supper:

“Those celebrating the Lord’s Supper know the pain and shame, the horror and scandal, of Christ’s death. However, they rejoice in the crucifixion and praise the slaughtered Lamb because God has raised from the dead the crucified Son and has accepted his intercession by enthroning him at God’s right hand. In Paul’s theology, as much as in the message of John, Hebrews, First Peter, and Revelation, the Crucified is always the raised and living Christ. The one who rules the Church and the world and who will come again is the crucified Christ. Through Christ alone the godless are justified and reconciled, saved and given peace. We have abundant reason to rejoice in Christ’s death and to praise the slaughtered yet living Lamb.”

To proclaim at the table is to do so with joy and gratitude. Love for God and gratitude for the sacrifice of his Son doesn’t exclude amazement and holy fear. That’s certainly part of it. But celebration and great joy that the Lord has come and that the lost have been found and that the dead are now alive expresses the real essence of the intent and mood of Christ’s meal. The Lord’s Supper is a meal of joy and thanksgiving, a eucharist, where we proclaim with one voice what Jesus’ willing sacrifice means for the world.

For the record, Carley and Valerie have selected UConn, Whitney has picked OU (she’s very conflicted right now), and I’ve got Louisville winning the national championship. My Final Four is Louisville, Memphis, Carolina, and Duke with the Cardinals outlasting the Blue Devils for the title in Detroit. Carrie-Anne hasn’t given us her bracket yet. She has 24 hours.