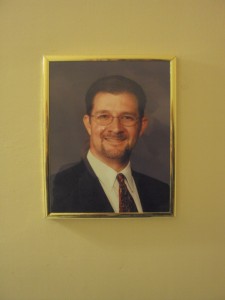 My plane landed here in Amarillo at just after 2:00 yesterday afternoon. It gave me just enough time to get to Bonham Middle School to pick up Carley, get unpacked and cleaned up for dinner with the family, and make it to Bivins Stadium to watch the Sandies remain undefeated in district play by hanging 70-points on Caprock. I dragged into the church office here at just after 9:00 and discovered, a little later, that a full color portrait of Dan Bouchelle was hanging in my bathroom, right above the toilet. I was startled, to say the least. It was both funny and creepy. I’m not sure who replaced my picture of Steve Martin from a scene in the The Jerk with Bouchelle’s mug, but it’s good. You got me. Greg? Matt? Adam and Mary are long-shots. I’m guessing it was Greg and/or Matt.

My very first blog post was on June 4, 2007, the morning after my very first official sermon at the Legacy Church of Christ in North Richland Hills. My plans then were to use this website to encourage and teach and support my local church family and the Kingdom of God worldwide. I said then I would also use the blog to post updates about my own family (four girls and a guy!). And I admitted this blog would also occasionally serve as an outlet for the sports thoughts and opinions that back up inside my brain.

Today marks post number 1,000. To commemorate this historic occasion, here’s a link to that very first post a little over five years ago. Much better than that, here’s a link to the post that generated the most comments (35) of any single post in the brief history of this site. The day I accidentally killed Valerie’s birthday gerbil led to a pretty nice article about rodent hygiene. But the resulting comments from friends and family and complete strangers made it memorable beyond description. Click here for that post and the complete discussion that followed, which included a philosophical debate about intentional and unintentional “accidents,” quotes from WKRP, a clever re-do of Allen Iverson’s famous “playoffs?!!?” speech, and a link to one of the funniest Super Bowl commercials of all time, the Outpost ad in which several hamsters are loaded into a cannon and shot into a plywood wall. Take about five minutes and check it out. You’ll be glad you did.

I’m not sure anything can ever top that gerbil post. So I won’t even attempt to write anything new today. This 1,000th post will only be about giving away the celebratory prizes. Those of you who posted comments on this site since September 20 were all entered into a drawing — multiple comments on multiple days resulted in multiple entrys. The names were drawn just a few moments ago from a cardboard box that originally held an Elvis Andrus bobblehead. Here are the names of the winners and the book(s) that lucky reader/poster has won:

Grand Prize – Chris Drake (Rob’s Dad) – all three books in the John Mark Hicks series on the sacraments of the Church of Christ. Come to the Table, Down in the River to Pray, and A Gathered People. This will be good reading for my confused Episcopalian friend.

First Prize – Jason Reeves – Resident Aliens. Jason, I know you’ve already got a copy of this book. Give it to one of your elders. Somebody besides Ray. I made him buy one while we were in Abilene last month. Or work out a trade with Graham.

Second Prize – Graham Bates – Surprised by Hope. Graham, I’ve never met you; I hope you love this book by N. T. Wright. Don’t let Jason talk you into a trade.

Fifth Prize – Jocelyn Boyer – The Jesus Way. I can’t wait to hear what you think of this book.

I’ll be in touch with all the winners by email before the weekend is done.

Thank you so much for participating. I’m so grateful to each of you who read and comment, who encourage and support me while I openly wrestle with and grow in my Christian faith. May our Lord use this little website to his eternal glory and praise.