“My Kingdom is not of this world. If it were, my servants would fight to prevent my arrest by the Jews. But now my Kingdom is from another place.” ~ Jesus 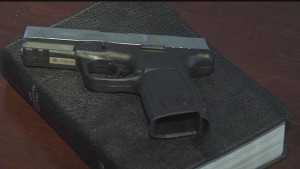 The graphic behind the news anchor on one of our local stations last night was of a handgun positioned on top of a Bible with the words “Pastors and Pistols” in red letters across the top. According to the story, it seems the Potter County Sheriff’s Office, in response to last week’s deadly shooting at a church in Charleston, wants to train and arm our city’s Christian ministers in order to protect themselves and their parishioners from a similar attack. The sergeant promoting the program stated matter-of-factly that using guns to protect churches is “an important ministry, it’s a part of the church.”

One of my great fears is that someday some guy is going to open fire in a worship service somewhere and six disciples of Jesus are going to shoot him dead. And it’ll be celebrated. And cheered. And the Christians who killed the criminal will be honored as heroes.

I’m not sure all of us are thinking clearly about this. Which is better: that followers of Jesus are killed in a worship service while praying for their attacker and forgiving him and pleading to the Lord for mercy for him; or that disciples of Jesus, in an effort to protect themselves, kill somebody in the middle of church?

Which situation better exemplifies forgiveness and grace and love? Which circumstance faithfully places one’s ultimate safety and security in the hands of our Lord? Which response better follows the teachings and example of the Christ? Which reaction gets more publicity as a radical, I-can’t-believe-they-did-that, testimony to our commitment to the non-violent ways of Jesus?

Which response says loudly and clearly that the church is actually very much like the kingdom of this world? Not very different at all…

I’m often surprised by Christians, when discussing such matters and thinking about such questions, who say out loud things like, “Well, Jesus wouldn’t do it, but I would.” That makes you, actually, not a Christian.

I’ve been surprised this week to see a couple of comments on national news stories from people who claim to be Christian, when asked what Jesus would do, reply, “Jesus would not allow himself to be a victim.” Actually, Jesus willingly left his home in glory, put all of his trust in the One who judges justly, and purposefully submitted to being the worst kind of victim. He blessed those who attacked him, he loved those who hated him, he forgave those who killed him.

How does shooting anybody — anybody! — in church conform to that?

Christians, leave your guns at home this Sunday. Practice prayer. Practice forgiveness and mercy. Practice discipleship and obedience. Pray to God that nobody with violent intent ever attacks your church family in the sanctuary. But also pray to God for the strength, if it ever happened, to respond in ways that will honor our Lord, the Prince of Peace.