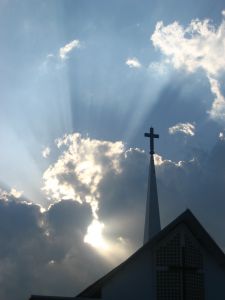 Allow me to be very clear about what I wrote at the end of the last post. Allow me this time today to elaborate on the idea that Churches of Christ are uniquely positioned to be at the front of a spiritual revival in the United States. Despite our obvious sins, despite our many shortcomings and almost comedic failures to hold to the most basic of biblical principles, I do believe the Churches of Christ are particularly poised to actually lead a fiery Kingdom renewal in this country.

We’ve always aimed for the ideal. By no means have we ever attained it. In fact, our historic insistence on shooting for the ideal, coupled with our consistent and extreme failures to reach it, are what make our story as a movement so ironic and interesting. But, truly, we and our Church of Christ forefathers have spent a great deal of time and energy preaching and teaching that we are to restore things to the way they once were or, much better, to the way things ought to be. I don’t mean restore the first century church; that’s impossible. Besides, the first century church had many problems and issues that make some of ours seem silly by comparison. I mean restore the Christian ideals of Jesus as Lord. I mean restoring our belief that the life, death, and resurrection of our Lord has signaled the breaking into this world of the eternal Kingdom of God. I mean restoring our lives as subjects of our Holy King to be in complete submission to him, to reject the ways of the world and embrace the ways of Jesus. I mean restoring the understanding that the church is to go into the world, but that the world is not to ever come into the church.

And we’re particularly poised in this most perfect of times to be the leaders of this Kingdom revolution.

It’s in our DNA to resist the hundreds of forms of compromise and erosion and domestication that corrupt the Christian faith in new ways in every generation. It’s in our DNA to be cynical about partnering with the new and the modern just for the sake of being contemporary and hip.

See how this fits?

At our very best and most clear, the Stone-Campbell Movement and the Churches of Christ are all about this kind of thinking and living. For most of the past two hundred years, we in the Churches of Christ have proclaimed forcefully that America is certainly not the Kingdom of God or even its messenger or example. We have preached against the idolatry of formalized church hierarchies and binding man-made creeds. We’ve taught that wealth and worldly fashion  generally pervert the demanding religion of Jesus. We’ve maintained that Christians do not fight Caesar’s wars, that division along denominational lines or over church practices is sin, and that the Church is the people — it’s not the building or the meetings or the rules.

In Things Unseen — I highly recommend this book for those of you who really want to understand why we think and act the way we do — Leonard Allen is very optimistic about our place at the front of the next great religious awakening in America:

The restorationist vision is fundamentally a means of critique and dissent. For this reason it will never fit comfortably with mainline or establishment forms of Christianity. Its sins tend to be those of severity rather than laxity, blind obstinancy rather than easy compromise, too-quick exclusion rather than too-ready inclusion, irrelevance rather than trendiness. Restorationists are constantly putting burrs under the seats of the sleepy and comfortable. They work from the conviction that accomodation and compromise are far easier and subtler than most suppose and that the call of Christ is higher, more serious, and more demanding than most care to entertain. That restorationists often fail to embody their own ideals should not obscure to our eyes the truth and power of the ideals themselves.

We are particularly poised. It’s in our DNA, it’s in our blood, to call people to something bigger, something higher, something more important, something eternal, something beyond us, something else, something that will outlive us, something that will matter for ever and ever. And Americans today — your neighbors! — are ready now to listen, to pay attention. If we will ever decide as a “movement” to return to our roots, to embrace again those clear ideals, to live them and practice them without compromise and share it with our neighbors, Christ will be honored and God will be praised. And I believe we’ll be, as a people, at the very front of his righteous and eternal will for this world.