Jumping In At Central

Have I mentioned that I don’t know anybody in Amarillo? We don’t have any family up there. We don’t know anything about the panhandle. Or the high plains. Or West Texas. Dallas – Fort Worth is my home. This is what I know. This is where our family is. Our roots are here in the Metroplex. North Texas. DFW. I know the landmarks of DFW. I know the history. The people. The culture. I know how Belt Line meanders through every part of Dallas County and each place where Boulevard 26 changes names. I’ve been watching Gloria Campos and Dale Hansen since I was a small child. Randy Galloway has been on my radio since I was a teenager. I can name all the churches here and tell you at which ones I attended a Summer Youth Series in the ’80s. I know 7-11 and Reunion Tower and Dallas competitiveness and Fort Worth pride. I know R. L. Thornton and LBJ and what it means to be driving south on the North Freeway. I’m familiar with Frisco and Forney and Aledo and Granbury. And I don’t get lost on Harry Hines.

But I don’t know a crying thing about Amarillo. 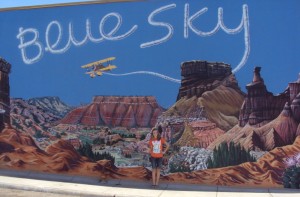 We’ve made a few trips up there over the past two months since agreeing to move our preaching ministry to the Central Church of Christ. We’ve fallen in love with Blue Sky and have already eaten there a half dozen times. And bought the T-shirts. I know those things at the intersection of 1-40 and Soncy Road are prarie dogs, not ground hogs. I don’t giggle anymore when I pull into the Toot N Totem for a Diet Dr Pepper. I’m growing a real interest in the storied history of Amarillo High School where our kids are going to be 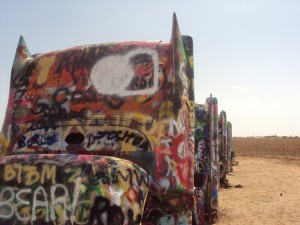 Sandies. And, yes, we’ve got those T-shirts too. We’ve taken in the TEXAS musical at the Palo Duro Canyon and are beginning to get comfortable with basements. We’ve already put our mark on Cadillac Ranch, spray painting the empty tomb symbol at the top of one of the middle cars.

It’s not home for us, of course. Not yet. It’s going to take a while. But something happened yesterday that got us a whole lot closer in a super short amount of time.

Loaves and Fishes. Central’s outreach to the poor and homeless in the downtown Amarillo community. Every Thursday. Inside the Central building, Kevin leads more than 150 of these souls in praise and worship to our God. Mary and Hannah make announcements and describe how much food and clothing are going to be distributed. Mark reads from God’s Word and encourages and exhorts, preaches and teaches the Gospel to people who are hungering and thirsting for righteousness. And for bread and water. And they pray.

Carrie-Anne and Carley and I jumped into the middle of our first Loaves and Fishes yesterday. We sang I Surrender All with a whole bunch of people who don’t have nearly as much to surrender as I do. We clapped and grinned through Lord, I Lift Your Name on High and several other songs. And then Mark brought Christy to the front of the room.

Christy has been coming to Loaves and Fishes for quite a while now. She’s never made it to a worship assembly in the main worship center on a Sunday morning, but I’ll bet half of Central knows her. Christy never misses a Thursday. She’s always there. But, yesterday was different.

Christy was grieving. Her heart was broken. Just 24 hours earlier, on Wednesday morning, Christy had found her 19-year-old son, Caleb, dead of an overdose in his bed in their house. He was her only son. And he was dead. Caleb’s body was in Lubbock awaiting an autopsey. And Christy was in God’s house with God’s people seeking comfort and peace.

A few minutes later, once the food distribution began, I grabbed Mark’s Bible and made my way to Christy. Hannah was already there. Listening to Christy. Holding her. Showing her the mercy and grace of our Lord. I opened up the Scriptures to Mark six where the Gospel tells us that while the apostles were rowing against the wind in the middle of a stormy sea, while the wind was blowing them off course, while they were “straining at the oars,” our Christ was watching them from the mountain. He was watching and praying. I showed her the passages in Isaiah 46 where our God promises to carry his children, to sustain them, to rescue them. And then I prayed with Christy.

I met a lot of people at Loaves and Fishes yesterday. I watched God work through my brothers and sisters at Central to minister to “the least of these.” I watched our Lord’s Spirit move through his Church to console and encourage, to provide and protect, to heal.

Amarillo is in Texas. It has a Rosa’s. The stores carry Diet Dr Pepper. There’s a Cheddar’s that serves my favorite Buffalo Chicken Strips. They play high school football on Friday night and go to church on Sunday. The people drive pickup trucks and SUVs and say “y’all.” They’re over-the-top warm and friendly. Fiercely loyal. That’s comforting. That’s comfortable. That feels like home.

But the thing that speaks to me, the thing that gives me confidence in this move, the thing that makes me feel right about this, is knowing that God is already at work in Amarillo and has been for a long, long time. It’s God. It’s him. Our God is moving at Central. All I’m doing is just jumping in.