Our great friends Stan and Kelly Conley treated Whitney and me to their amazing seats at last night’s Monday Night Football game in Arlington. It was the home opener for the Cowboys against the hated Eagles and the first Cowboys game we’ve attended in ten years. Needless to say, Whitney was beside herself. She wore out her rally towel and both arms before kickoff. She exulted with every Cowboys score, gloried in every Philly penalty, and nearly fainted with delight when Dallas went over the 40-point mark in the fourth quarter.

I hate it when the Cowboys look good. It would be very easy for me this morning to write about how Jalen Hurts is a disaster and this Eagles squad might be the worst team in the league. But, Dallas did play a great ballgame last night. You play the schedule as it comes in the NFL and the Cowboys, for once, committed to the run against Philly’s two-deep safety zone all night. Dallas dominated time of possession, kept the penalties to a bare minimum, and basically allowed the Eagles to beat themselves. Which they did. And while I did not love the whipping it turned out to be, I did thoroughly enjoy the experience sitting next to our oldest daughter. 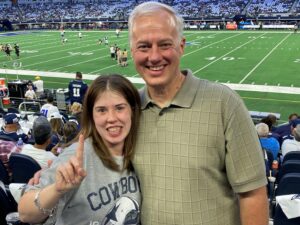 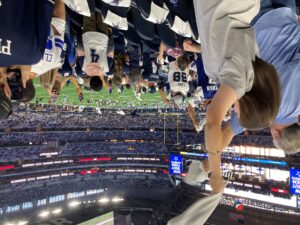 Whitney’s about as hard core as it gets among Cowboys fans and she had an absolute blast last night. Stan and Kelly’s seats are on the 40-yard line, a perfect ten rows up behind the Cowboys bench. And Whitney was just overjoyed to be able to watch Dak and Zeke and Cooper and her favorite players, up close, in person, on the sidelines. She kept waving that towel madly throughout the game, whacking me in the side of the head after every good play and during every third down. She stood for nearly the entire game, exchanged wild high-fives with everybody sitting within a ten foot radius, and went through two massive nine-dollar Diet Dr Peppers. She loves the Cowboys and she absolutely despises the Eagles, so it was a perfect night for the Whitster.

My favorite moments came at the half. The Pro Football Hall of Fame presented Cliff Harris, Drew Pearson, and Jimmy Johnson with their HOF rings during halftime in a ceremony that featured every living Cowboys Hall of Famer in person together on the field. Staubach and Lilly, Rayfield Wright and Tony Dorsett, Mel Renfro and Randy White, Aikman, Emmitt, and Michael Irvin – they were all there on the field to welcome Captain Crash, Drew, and the Jimster. It was chilling. Goosebumps. The three newest inductees each gave short speeches, brief synopses of what they’ve been saying for a year now. Harris recalled his humble origins as an undrafted free agent out of Ouachita Baptist and thanked Gil Brandt for hunting him down, Drew (sadly, I think) raged into the microphone again about how his Hall of Fame induction validates his career and himself as a human being, and Jimmy thanked Jerry (boo), his players (yay), and all the Cowboys fans (crescendo of applause), for the great honor of coaching the Cowboys. And then, of course, he punctuated the end of his time with one more “How ’bout them Cowboys!” to which the stadium nearly collapsed with thunderous ecstasy.

I didn’t realize then that the game was already over. But it was. After Trevon Diggs’ pick-six to begin the third quarter, it was only a matter of how much. As the second half wore on, the guys on the row in front of us got drunker, the over-the-top couple from Corpus Christi next to me got rowdier, the Eagles wilted, the crowd overall became more aggressive, the Cowboys dominated, and Whitney’s grin grew bigger and wider. 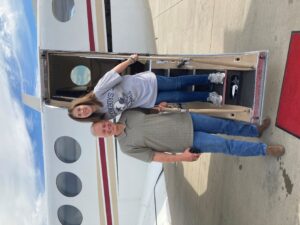 Thank you to Stan and Kelly for their great generosity and a wonderful night together in Arlington. Thank you to Dale and Rita Brown for the gracious gift of their transportation and their pleasant company to and from the game. And thanks to the powers that be for opening the roof of the Death Star.

Experiencing the game with Whitney, enjoying her joy, I allowed myself a little smile here and there at this perfectly-scripted night for the Cowboys. It’s nights like this, when the fans leaving the stadium are all talking Super Bowl, that make the inevitable loss to the Panthers this Sunday so delicious.