Healing Comes in the Running

“Strengthen your feeble arms and weak knees. ‘Make level paths for your feet’ so that the lame may not be disabled, but rather healed.” ~Hebrews 12:12-13 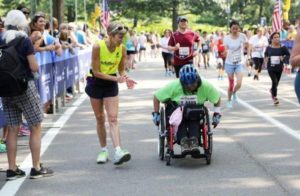 In the big cities that host the large annual marathons in which thousands of runners participate, the front of the race is dominated by world class athletes. They’re young and lean and fast and they just seem to effortlessly cruise to the finish line. At the back of the race, though, it’s a different picture. That’s where all the ordinary runners are.

The ones near the back have a few more years under their belts and a few more pounds hanging over their belts. There’s a lot more stopping to catch a breath and to get a drink. There are also people in wheelchairs and on crutches, people with disabilities. Those people are courageously struggling. They’re determinedly suffering. And those people at the back of the race help each other. Have you noticed that? If somebody back there gets weak from the heat or faint from exhaustion, the other runners pay attention to that and they help out. At the back of the race, it’s much more about compassion than competition.

The great race of the Christian life is a lot more like the back of the pack than the front. And you ought to be able to find that compassion in the Church.

If you are a weary or discouraged Christian, if you’re an out of shape Christian, the preacher in Hebrews encourages you to strengthen your feeble arms and weak knees. The runners who are lame, the Christians who are struggling and hurting and suffering still have to get out there on the track and run. You can’t say, “I’m too weak to run” or “My legs are too hurt to participate” or “I’m in too much pain.”

Like Jesus, the preacher says, “Pick up your bed and run!”

In the Christian faith, if you play hurt, you end up healed. If you stay on the sidelines, the injury gets worse. If you keep running, the Word of God, through the people of God, promises complete healing.