He Will Come to Judge

“On the third day he rose again from the dead, ascended into heaven, and sits at the right hand of the Father Almighty, from which he will come to judge the living and the dead.” ~from the Apostles’ Creed 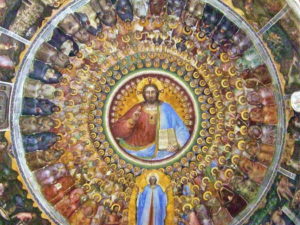 Nobody wants to see a judge. Appearing before a judge is not at the top of anybody’s list of enjoyable things to do. Not even lawyers, as sick as they are, want to go see a judge (sorry, that’s a cheap shot; I should apologize to Utsinger, Flow, the Egglestons, J. Bailey, and maybe even a couple of judges). If you walk into any government building or have a conversation with any government official and she says, “The judge wants to see you” or “You’ll need to appear before the judge” all your organs start to shut down. It’s not fun.

“The Son of Man is going to come in his Father’s glory with his angels, and then he will reward each person according to what he has done.” ~Matthew 16:7

This is a tough topic. The idea of a judgment is offensive to our culture. In this age of uber-tolerance, in this age of “Don’t judge me!” society bristles at the concept of any kind of judgment on almost anything. This might be Christianity’s most offensive doctrine. Our culture has no problem at all with a God of supreme love who supports us and accepts us no matter how we live. But it strongly objects to a God who punishes people. We have no problem with a forgiving God, but we can’t accept a God who judges.

Well, guess what? It’s both. We know it to be both.

Christians believe that God is both a God of love and of justice. Lots of people struggle with that. They believe a loving God can’t be a judging God. I’ve been asked this before, and maybe somebody’s asked you, “How can a God of love also be a God of anger and wrath? If God is loving and perfect, then he should forgive and accept everybody, right? He shouldn’t ever get angry.”

All loving persons are sometimes filled with anger because of their love. I’m grateful to Tim Keller’s insights here from his eye-opening “The Reason for God.” If you really love a person and someone harms that person, you get angry. If someone hurts your spouse or harms your child, you get ticked off. Even if they are the ones hurting themselves, you get angry. Think about how you feel when someone you love deeply is being damaged by terrible decisions or stupid actions or bad relationships. You don’t just tolerate it with kind of an apathetic “whatever” like you would if she were a stranger. Far from it! You get mad. Angry. Anger is not the opposite of love; hate is the opposite of love. God’s wrath is not a cranky explosion; it’s his determined opposition to the cancer of sin that’s eating out the guts of the human race he loves with his whole being.

The Bible says God’s wrath flows from his love and delight in his creation. He gets angry at evil and injustice because it’s destroying his creation’s peace and integrity.

“The Lord is righteous in all his ways and loving toward all he has made… The Lord watches over all who love him, but all the wicked he will destroy.” ~Psalm 145:17-20

We believe that today Christ Jesus sits at the right hand of the Father Almighty, from which he will come to judge the living and the dead. We’ll unpack some of that here this week.