Yeah, it’s a Skip Bayless headline, but it’s the best I’ve got today on just four-and-a-half hours of sleep.

It was a rock-and-roll night in Amarillo, starting with the 70+ mph winds at 5:00 in the evening that downed a huge billboard on Western Street, to the tornado warnings and funnel clouds spotted at 45th and Soncy, about a mile and a half from our house, to the five or six minutes of intense wind and hail that drove all five of us to the closet with our pillows and cell phones. Neither of last night’s two tornadoes — the one near our house and the one near downtown — actually touched the ground. But the hail and the high winds did plenty of damage to the Sleepy Hollow and Puckett neighborhoods of southwest Amarillo.

The tornado warning was issued for Randall County at just before 11:00 last night. I woke up Carrie-Anne and we started getting the closet ready. I moved Whitney’s truck as close to the northeast corner of the house as I could, locked all the doors, and closed all the shutters. I grabbed the weather radio out of the garage, a flashlight, and one more Diet Dr Pepper, and headed back to the TV in our bedroom to watch the radar. It was definitely coming our way. In fact, John Harris, the guy on channel four, drew the path of the storm and said, “It’s going to travel east right between 45th and 34th.” He may as well have drawn a little house on his map and said, “Right there, the Stanglins’ house, that’s where it’s going to hit!” The sirens started sounding in our neighborhood at about 11:10, prompting us to wake up the girls and herd them down the hall to the closet. 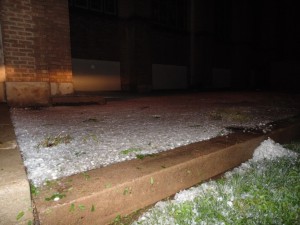 While they were hunkering down, I kept my radar vigil in the bedroom until they announced the tornado at 45th and Soncy. It was dark, of course, and I couldn’t see the sky. I had no feel for what was really happening. So, for the first time in my life, I actually got in the closet with Carrie-Anne and the girls. Whew, it was hot in there. All five of us with our pillows and blankets and more than a little anxiety and stress. Yuk. I left the door cracked just enough so we could get a little bit of air and still listen to the TV. I texted with John Todd, who had experienced the storm first in Bushland and came out OK. I talked briefly to Greg Dowell, whose family had already fled to the safety of Doug Hershey’s basement. Declan called to tell me that he and some friends were determined to stay outside through the storm. (Way to go, Declan!) And the girls were all texting their friends, too. 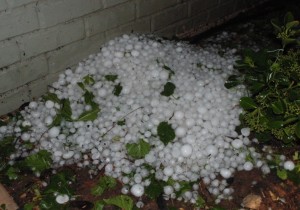 Then it hit. Hard. Loud. Scary. Five or six minutes of high winds and heavy hail. Almost an inch-and-a-quarter of rain. Our house was just getting pounded. And then, in an instant, it was over. Almost too quickly, it was over. We hesitated to come out. Is it safe? Is it really over? Are we in the middle of something and about to get slammed by the back end of it?

Then I heard John Harris freaking out on the TV. They got a visual of the downtown funnel just down the street from their studios and they were scrambling. The on-air guys were yelling for everybody to get in the bathrooms. They were knocked off the air for about thirty seconds. And I couldn’t stand it anymore. I jumped up to watch and, once I got a look at the radar, realized we were in the clear. It was time to go outside and check the property. 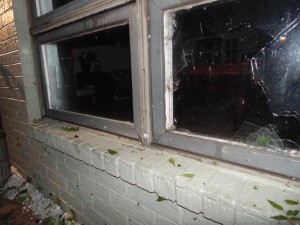 It wasn’t nearly as bad as I thought it was going to be. I assumed our four sky lights were going to be smashed, but somehow they made it OK. The only broken glass was on the north side of the house where the hail broke through two of our game room windows. Thankfully, those windows are double-paned, so all the weather stayed outside. And one fence post was blown down along the driveway in the back. The ping-pong ball sized hail stripped our flowerbeds and scattered leaves and twigs all over the yard and street. The hail was stacked up in big drifts in lots of places and was spread out like snow in others. But, other than that, there’s just going to be a lot of raking and sweeping over the next day or two.

Well, and I may want to think about adding a ceiling fan to that closet.