I was much relieved last night at the Delta 40th Anniversary Event to learn that the official club archives have recorded the Great Pumpkin Caper of 1988 as the “Scott Williams Knife Incident.” Whew! Thank you. I was thrilled to see David Butts alive and mostly well. I was shocked to hear Alfred Branch actually use the word “jiggle.” Twice. I was beside myself with hysterical laughter as Delta legends Boyd Hale and Tom Burkhart did that email bit. I was surprised to learn that Dewey’s anatomical anomaly is an inverted mole. And I became nervous when I discovered that nearly everybody remembers everything about “that summer.” 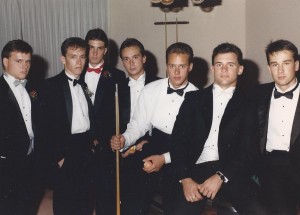 Last night was absolutely fabulous. The whole weekend was an unprecedented success. I could write a separate post for every thing we’ve relived together over the past 48 hours. Ozzy’s larceny school. Brian Vickery’s hat. “Viva Dukakis!” Double secret probation. The 100-person party. Sam. Sharing a canoe with Scott. Trips to Dallas and back. Hit-and-run. Wall ball. Crested Butte. The “Flour Incident.” Delta Dolls. Last in line with the Keymaster at Lake Murray.

I was honored to be asked to lead the prayer at last night’s bash. And more than a little nervous. That was a tough room last night. It was like a normal Tuesday night Delta meeting up in the DAH, but with much better food. And the smart-alek comments and jeers from the peanut gallery and heckling magnified by five or six times. I was honored. But I was very acutely aware of the situation. I was in a banquet hall full of incredibly brilliant and wildly successful men, clever and witty men who jump at the chance to insult or the opportunity to heckle, like Nancy Inman leaping to conclusions, who had not gathered this particular night to pray. However, I sensed that this prayer was going to be important. It needed to be important. It would be the only time during the evening when everyone in the room would be completely quiet (except for Brad Robison’s old man noises) and I would have a chance, by the grace of God, to maybe not only set the tone for the evening but also point us to a bigger picture that would honor the guys who’ve gone before, that would inspire the ones who are coming after, and would recognize our God as present and active in all of it. 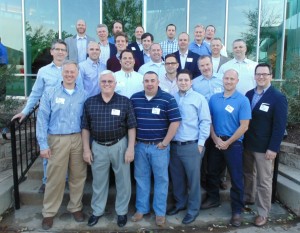 I worked on it for about an hour at my sister Rhonda’s dining room table yesterday afternoon. A blue pen and a yellow legal pad. I’m giving you all the details because Osburn and Adair and Eugene are telling me today that they want to archive the prayer. You know, I thought it was a pretty good prayer. But the response while I said it, immediately after saying it (emcee Steve Shoemaker suggested high-fives around the room), most of last night (Branch requested I lead the same prayer at Memorial Road on Sunday morning), and continuing sporadically throughout today (among other texts received today: “greatest prayer I’ve ever heard” and “the perfect prayer”) has been overwhelming, if not a bit over-the-top. Apparently, it moved some people. Again, I thought it was a good prayer. But this has been quite ridiculous.

So, in the interests of the official Delta archives, I present to you the prayer I led at last night’s Delta 40th Anniversary Event. Give our God the glory. He is faithful. And very, very good.

Holy Father above, we acknowledge you as the Creator of Heaven and Earth and the Creator and Sustainer of our very lives. We praise your magnificent name. You are a gracious and compassionate God, slow to anger, and abounding in love and faithfulness. You maintain your great love to thousands. And you forgive our wickedness, rebellion, and sin. And we thank you.

Forty years ago, God, our brothers set out to establish Delta Gamma Sigma on the campus of Oklahoma Christian College and forever redefined the meaning of “social service club.” You have been with us over those forty years, Father. And we thank you.

You are the God who has protected us. We are alive today, Lord, when most believed that some of us wouldn’t be, because of your protection. You are a merciful God. And we thank you.

You are the God who blesses us with the gift of friendship, the gift of relationship and brotherhood. We are united today, Lord, because of our mutual spirit and pride. You are a relational God. And we thank you.

You are the God who has delivered us to lives of service to you and to your Church and to the world you created. We are ministers, doctors, lawyers, church shepherds and school teachers, social service directors and missionaries because of your guidance. You are a patient God. And we thank you.

You are also the God who allowed for the formation of Phi Gamma and Kappa and Sigma and Chi. You are a mysterious God. And we wonder.

You are the God who gives us stories. We are connected today, Lord, because of our common experiences and the narratives that have shaped us and bound us together, generation after generation: from Chester Knight and Mike Carrol, to Robert Elliot and Jeff McCormack, to Alfred Branch and Boyd Hale, to Wayne Russell and John Young, to Philip Maple and Brent Heath, to Landon Cobb and Chase Phillips, we are one, Father, because of our stories. And we thank you.

For the laughter and camaraderie in the room, for the brotherhood we share, we give you praise and thanksgiving.  And we humbly ask for your continued blessings of love and joy for our families, for our friends, and for all those who will come after us bleeding maroon and gold. Thank you, God, for an excellent forty years!

In the name of our risen Lord Jesus…

And all of Delta says “Amen!”