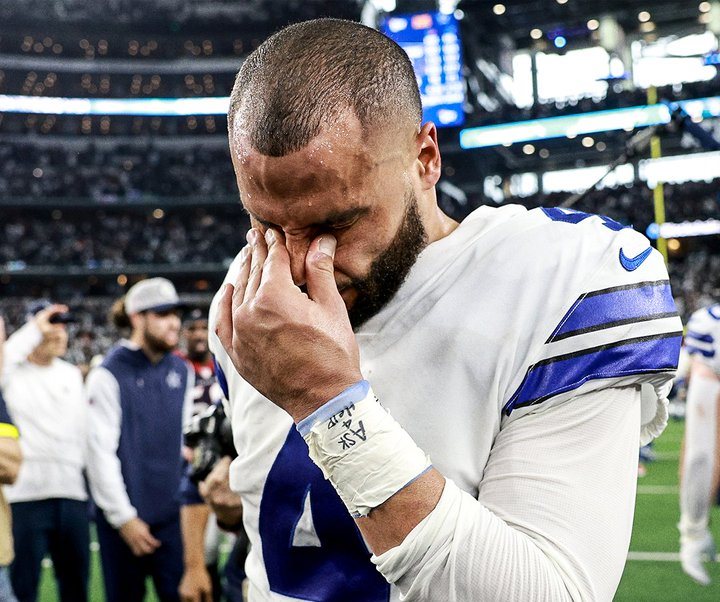 The Cowboys are tanking. Right on schedule. It’s the middle of December, right?

There is so much to break down from the Cowboys’ come-from-ahead-loss in Jacksonville. It’s a long list of all the ways Dallas failed yesterday and the troubling trends that are becoming this team’s identity.

The once dominant Dallas defense gave up a season-high 34 points and a season-high 503 yards, only sacked Jaguars quarterback Trevor Lawrence once, and gave up four touchdown passes. Jacksonville converted eight third-downs on the Cowboys defense. And, with a 17-point lead and only five minutes left in the third quarter, the Dallas defense allowed the Jags to score three touchdowns in nine minutes – 21 unanswered points! When the Jaguars got the ball with 1:01 on the clock, down three, with only one timeout, Dallas let them go 41-yards in seven plays, including two successful third down conversions, to kick the game-tying field goal that sent the contest into overtime.

We could also talk about Dak and his interceptions. The Cowboys quarterback has thrown multiple picks in three of their last five games and has the highest interception rate in the NFL. The walk-off pick-six that ended the game in overtime did bounce off receiver Noah Brown’s chest, but Dak threw it into double coverage. It doesn’t matter. Dak has thrown more picks than any QB since the midpoint of the season and the coaches and press have been talking about it with him for three weeks. Still, he threw two more interceptions yesterday. And they were huge.

What about blowing leads? Dallas’ last two losses have come with a 14-point lead in the fourth quarter in Green Bay and a 17-point lead late in the third yesterday.

What about the Colts game two weeks ago – holding only a two point lead heading into the fourth quarter against the most dysfunctional team in the NFL? What about the Texans game last week – trailing the NFL’s worst team all the way until their last drive of the day and needing an interception in the end zone to secure a three point win?

All of those things are worthy of their own post. But here’s the thing that needs to be talked about today. With a three point lead and only 1:28 to play in the game and the ball, Dallas only needed to get one first down to win. And they couldn’t do it. They ran on first down and Jacksonville burned their first timeout. The Cowboys ran on second down and the Jags called their second timeout. Then, on third and ten, Dak threw a bomb down the left sidelines that fell incomplete and stopped the clock. Jacksonville didn’t have to use their last timeout. Dallas handed Jacksonville an extra timeout. Gave it to them. A freebie. And the Cowboys punted.

Jacksonville needed to go forty-something yards to tie the game and they had one timeout still in their pockets. Mike McCarthy gave them that timeout. He should have run on third down and forced the Jags to call timeout. With no timeouts, Jacksonville’s offensive options are incredibly limited – no runs, and passes only to the sidelines. But with that extra timeout gifted to them by the Cowboys? The playbook is basically wide open. And it happened. The Jaguars marched 41-yards on seven plays, used that extra timeout to stop the clock, and kicked the game-tying field goal.

Mike McCarthy’s game mismanagement and clock abuse is what you get when Jerry Wayne is your owner. There’s a reason they call it “running out the clock.” You don’t get a lead late in the fourth quarter and say, “Now we need to pass out the clock to win.” You run out the clock. You force your opponent to use all their timeouts. This one’s on McCarthy. And the owner who hired him.

The Cowboys are backing into the playoffs again. Yesterday’s loss eliminated their long-shot chances at winning the NFC East, but New York’s win over Washington pushed the Cowboys into a Wild Card position with three games to go.

Dallas will host the 13-1 Philadelphia Eagles on Christmas Eve. Jalen Hurts will do whatever he wants.

The last two Cowboys games are on the road, against the Titans who are desperate for a playoff spot, and in Washington where they might still be in the hunt for a postseason berth. Both those opponents will probably be playing for something meaningful. There’s a chance Dallas goes into their playoff game at Tampa Bay or at San Francisco on a four-game losing streak. The Cowboys could very realistically lose three of their last four. At best, they’ll be 2-2 in their last four before the playoffs.

With a tired and banged up defense, a quarterback who’s losing his identity and the confidence of his teammates, and a coach named Mike McCarthy.