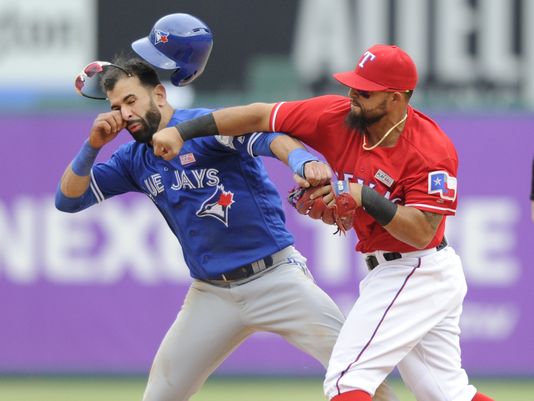 When the Texas Rangers are appearing in a divisional playoff series it’s always going to be a weekday afternoon start. For the team with the most division championships in MLB over the past ten years, including two World Series appearances, and the number four media market in the country, it would seem an evening prime time game would be in order. At least one. No, not for the Rangers. So, again, at work, we’re forced to start faking the cough during the mid-morning and then send out the vague email after lunch that you’re just not feeling right and need to go home. Hey, we’re all used to it by now (cough, cough).

I highly recommend that before the 3:38pm start, Texas time, you click here to read Jamey Newberg’s excellent preview of the Rangers-Jays series. I’ve always enjoyed the way Newberg writes, combining his expert knowledge of the game and his balanced observations with his unabashed love for the Rangers. He’s a real Rangers fan, no doubt. But his insights are just about as good as you’ll get anywhere else. Consider this from today’s Newberg post:

“We all want a championship here and, along the way, a knockout of the Blue Jays in a strictly figurative sense. But there’s no way any of us would want to skip ahead to the last page just to find out the result, right? The journey — as 2016 has exemplified — is such a huge part of the payoff. I can’t wait to see how this all plays out, whether it’s crushing or the best thing ever, but I have zero interest in finding out how it ends without embracing the experience of getting there.”

The Dallas Morning News has an outstanding preview section that includes a timeline of the intense rivalry between the Blue Jays and Rangers, with video, from the bat flip to the punch. You can find ballpark food comparisons and great player quotes about the series. It also includes lots of links to several national writers who seem split between picking Texas and Toronto to advance to the ALCS.

All of the previews include a heavy emphasis on the bad blood between these two teams. Sports Illustrated is picking the Blue Jays in five games. ESPN focuses only on the rivalry and doesn’t even predict a winner.

Personally, all the statistics through the grueling 162-game season favor the Rangers in any series they might play this month. Their historic winning percentages against winning teams and in one-run games, the 35-innings scoreless streak for the Rangers bullpen down the stretch, the high-powered offense, the best 1-2 punch at the top of the rotation in team history — all of these factors give me tremendous confidence going in. Who would be shocked if Texas takes this series in four games, breezes past the Indians or Red Sox in the ALCS, and wins their first ever title with relative ease? At the same time, Darvish has a tendency to give up early home runs and Hamels looked better in April and May since he’s looked since the All-Star break. And the Rangers offense is capable of going ice-cold for two or three games in a row. So, I don’t trust ’em. I love ’em, but I don’t trust ’em.