It’s going to be a record 101-degrees in Amarillo today, but it feels like fall. Drum lines and cheerleaders and football players and victory chants do it for me every time. It’s high school football season. Zero week starts tonight at Bivins Stadium when the Amarillo High School Sandies take on Midland. Carrie-Anne and I just returned from the pep rally in the Sandies Gym. We sat next to the Freshmen section and right across from the Seniors. But we never once saw either one of our girls. (If they had seen us, I’m sure they would have made sure we didn’t see them.)

There’s something really cool about being a part of this Amarillo High School scene. It’s the sense of genuine

community. I’m sure it has a lot to do with the history of the place. Amarillo High has been around since 1889. There’s a lot of tradition here. In fact, they do all they can to keep the traditions alive. They still use the old 1920s mascot and logos on a lot of their literature and publications. They still employ a quaint rally chant from the ’40s, “Blow, Sand, Blow!” at opportune times during football games. While discussing tonight’s tailgating activities in the parking lot after the pep rally, we met a couple of people who went to school at AHS, sent their kids to AHS, and now have grandchildren here on the football team and on the spirit squads. There’s a lot of that here. They value their history. They uphold their traditions. When you’re a member of the Amarillo High School community, you’re a part of something much bigger than yourself. You’re a part of something that’s been vital and important since before your grandparents were born and something that’ll be vital and important long after you’re gone. 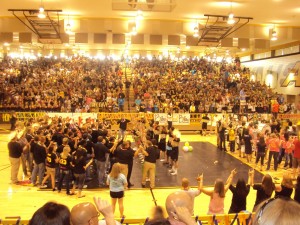 There’s a really provocative and interesting blog post in here somewhere about traditions in God’s Church, about traditions within our Church of Christ heritage, about the value of those traditions and what they mean to a community of believers. There’s a lot to write today about being connected to the greatness of the past, those men and women of the faith on whose shoulders we’re standing today. There’s plenty to consider regarding what we’re doing today and how it will impact future generations of disciples of Jesus.

But you’ll have to think about it and discuss it yourself. You’ll have to draw your own conclusions today. C-A and I are going to lunch and then we’ve got to find a couple of Sandies T-shirts before kickoff.