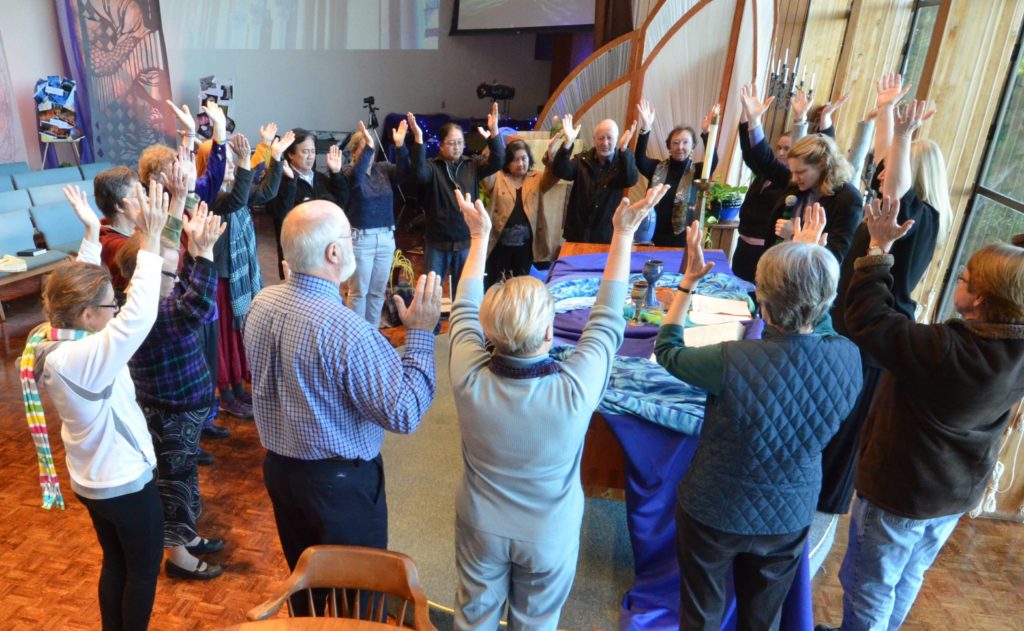 If the table is the place to experience the real presence of Christ and the real fellowship and community we have together with God’s people — if the purpose of communion is, well, communion — then the way we do it matters. The form of the Lord’s Meal serves the function. In fact, I’ll suggest the form is the function. In many ways, the medium is the message.

You wouldn’t raise money to fight the sexual exploitation of women by having a car wash at Hooter’s. You can’t hold a Weight Watcher’s meeting at Furr’s Cafeteria. We don’t ask people to pay for Financial Peace University with a credit card. That defeats the purpose. The form matters.

“When you come together, it is not the Lord’s Supper you eat, for each one eats his own supper without waiting for anyone else.” ~1 Corinthians 11:20-21

It’s important to remember that the Church’s Lord’s Supper started out as a full meal. For almost the first 300-years, the Lord’s Supper was a potluck. The Greek word “dipenon” is translated as dinner, feast, meal, banquet, main meal. It most commonly refers to the main evening meal. And, according to Paul, if the church eats the meal one way, it’s the Lord’s Supper; if you eat it another way, it’s your own supper.

So, what’s the problem Paul’s trying to correct? What are these Christians doing wrong?

“When you come together, it is not the Lord’s Supper you eat, for each one eats his own supper without waiting for anyone else. One remains hungry, another gets drunk. Don’t you have homes to eat and drink in? Or do you despise the Church of God and humiliate those who have nothing? What shall I say to you? Shall I praise you for this? Certainly not!” ~1 Corinthians 11:20-22

The problem at this church was the breakdown of community during the Lord’s Supper. You’re not waiting for others, you’re not sharing your food with others, people are going hungry, people are being humiliated. The rich Christians are getting stuffed and drunk while the poor Christians are starving and being singled out as not belonging. People are going back for seconds before others have been through the line once. They’re saving seats. Members are on one side of the room and visitors are on the other. New members are eating by themselves. Division. Selfishness.

So, that’s the problem. What’s the corrective? How does he fix it? By pointing to Jesus. He reminds them of Jesus.

“For I received from the Lord what I also passed on to you: The Lord Jesus, on the night he was betrayed, took bread, and when he had given thanks, he broke it and said, ‘This is my body, which is for you; do this in remembrance of me.’ In the same way, after supper he took the cup, saying, ‘This cup is the new covenant in my blood; do this, whenever you drink it, in remembrance of me.’  ~1 Corinthians 11:23-25

The table is shaped by the salvation work of Jesus. The Church’s Meal reflects and demonstrates the Gospel values of sacrifice and service. The Lord’s Supper expresses the way of Jesus: selflessness, giving to others, considering the needs of others more important than our own.

“For whenever you eat this bread and drink this cup, you proclaim the Lord’s death until he comes.” ~1 Corinthians 11:26

The Lord’s death broke down all the barriers between us and God and between us and each other. The Lord’s death unites all God’s people together. Around the table on Sundays and anytime we eat and drink together in his name, we’re proclaiming and practicing all the salvation things Jesus died for. The meal proclaims everything that was accomplished at the cross: acceptance, fellowship, unity, forgiveness, peace, love.

And when Paul uses the term “Lord” and when he says “until he comes,” he’s reminding us that Jesus is alive and he’s coming back! And until he comes, we express and experience the realities of our salvation with him and one another in holy community around his table. How we eat the Lord’s Supper matters.