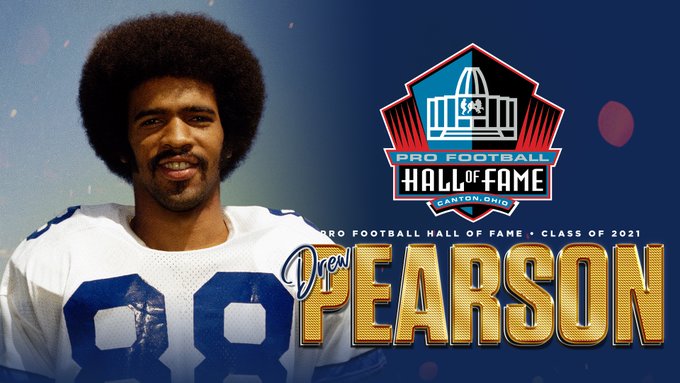 After a 33-year snub, the only member of the NFL’s All-Decade Team of the 1970s not to be inducted into the Pro Football Hall of Fame is finally going in. The original number 88, Drew Pearson, was announced last night as a member of the 2021 Hall of Fame Class and will be officially inducted in Canton in August. Drew becomes the 20th Dallas Cowboy to receive this immortal distinction.

I’ve still  not heard a legitimate attempt by anyone associated with the Hall of Fame voting  as to why Drew has been neglected for so many years. It’s not just a head-scratcher of a mystery for everyone who cares about such things, it’s a travesty of justice. Not only has Drew been the only member of the 1970s All Decade Team to be left out, he is the only wide receiver of any All-Decade team to not be inducted. Not only that, he is the only offensive player from any All Decade Team since 1930 to not be included. It’s about time. It’s way past time. 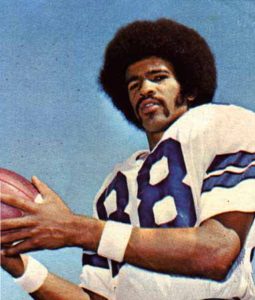 As an undrafted free agent coming out of the University of Tulsa in 1973, Pearson moved from third string to starter during the course of that first season and, by the time of his retirement in 1984, established himself as the greatest receiver in Cowboys history. He played all eleven years in Dallas, helping lead the Cowboys to seven conference championship games and winning three, three Super Bowls and winning Super Bowl XII over the Broncos. During an era when NFL teams ran first and threw later, Drew amassed 489 catches for 7,822 yards and 48 touchdowns, plus an additional 68 catches for 1,131 yards and eight touchdowns in 22 playoff games. That kind of consistency made him a team captain and an NFL superstar, his last-second 50-yard hip-grab of Roger Staubach’s “Hail Mary” in Minnesota made him a legend, and his rightful place in the Hall of Fame cements his status as a football immortal. 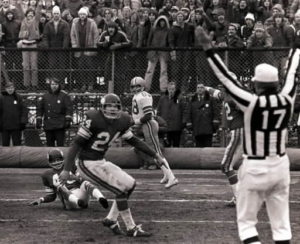 I had the great honor of working with Drew during my mediocre sports radio career in Dallas. I interviewed him many times on the phone and in person between 2000 and 2005 and once talked him into co-hosting my three-hour talk show with me before the 2005 draft. You’ve never met a nicer guy. A more humble and gracious guy. A more down-to-earth human.