Death to Force and Fear! 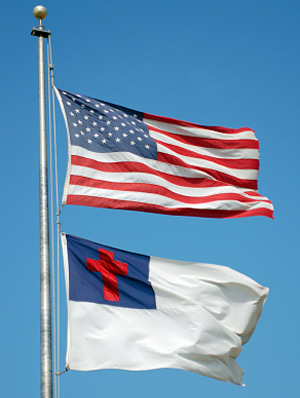 The apostolic letter to the churches in Galatia begins with a reminder that “the Lord Jesus Christ gave himself for our sins to rescue us from the present evil age.” The letter ends by telling us what that’s all about, where this whole thing is headed: “What counts is a new creation!”

The crucifixion and resurrection of Jesus has put to death the structures, values, and ways of this world and inaugurated the new, glorious, and eternal creation. We are no longer bound to the ways and means and goals of this fallen world; we are set free by Christ to live in the glory of God’s new creation. So why do we insist on grabbing the old and fading and refuse to embrace the new and everlasting? Why do we invest so much of our identity and energy into a world that’s been given a death sentence?

I am increasingly distressed at the way American Christians flock to this country’s current President and giddily embrace his politics of force and fear. This sell-out of our Christian principles was never more glaringly on display than when Mr. Trump hosted one hundred “evangelical” church leaders Monday for a dinner meeting at the White House.

The President gathered these church pastors and Christian authors to gin up support for his agenda and for all Republicans in the November mid-term elections. He used both force and fear to rally these Christian leaders. And they ate it up.

According to everything I’ve seen and read about that meeting (please see these stories from the Washington Post, New York Times, Rolling Stone, Jennifer Rubin, and CNN), Trump claimed that he has given so much to Christianity, he has protected Christianity, he has even helped revive Christianity, and if the Democrats prevail in the November elections, Christianity will be devastated as a religion in this country.

Trump told these Christian pastors the mid-term elections are “a referendum on your religion” adding, “You’re one election away from losing everything that you’ve got.”

He used force. He appealed to strength. He promised increased advantages if these pastors and preachers would only use their power for his cause. “You have tremendous power,” he said. “You have people who preach to almost 200-million people. I just ask you to go out and make sure all of your people vote. Because if they don’t — it’s November 6 — if they don’t vote we’re going to have a miserable two years and we’re going to have, frankly, a very hard period of time because then it just gets to be one election — you’re one election away from losing everything that you’ve got.”

He told these Christians that he was delivering their power to speak: “You’re not silenced anymore.” He declared Christianity to be plateaued (I can’t argue with him there) and that hitching the Church’s wagon to his agenda would cause the Church’s stock to rise (I would suggest it’s getting in bed with this country’s politics that is damaging Christianity).

The President also used fear at this Monday meeting with preachers and pastors. If Democrats are successful in November, “they will overturn everything that we’ve done, and they’ll do it quickly and violently — -violently. There’s violence.”

“The level of hatred, the level of anger is unbelievable,” Trump said. “Part of it is because of some of the things I’ve done for you. You’re one election away from losing everything that you’ve gotten. Little thing: Merry Christmas, right? You couldn’t say ‘Merry Christmas.'”

Force is how the world operates. The world gets things done by using force. But our Lord brings death to the use of force. His death and resurrection dooms force as a method to accomplish anything. Jesus shows us the way to really get things done, the way to really save the world, is by sacrifice and service, it’s in submission and obedience. And love.

Fear is how the world operates. This is how the world gets its way, by spreading fear and making people afraid. The world makes decisions out of fear. The way of the world is to react out of fear; to be motivated by fear to do the wrong thing and to be paralyzed by fear in the face of doing the right thing. But our Lord brings death to fear. His death and resurrection obliterates all fear as any kind of factor for anything. Jesus shows us the way to face life and death and everything in between is with faith, not fear. The way to overcome is with trust that God is in charge, that God is working all things together for your good and the good of the world, trust that God will vindicate the way you live and die.

“May I never boast except in the cross of our Lord Jesus Christ, through which the world has been crucified to me, and I to the world.” ~Galatians 6:14

The new creation, the new life we live in Christ, happened at the cross and Paul’s banking on it. He’s all in. For Paul, the world no longer has any power, authority, or control over him. The world’s standards and rewards mean nothing. The world does not determine Paul’s status or place. It’s all dead to Paul in exchange for this new life in Christ. Jesus says we are not of this world, just as he is not of this world.

So why do Christians fall all over themselves for Trump?

In that dinner meeting Monday, these one-hundred pastors embarrassed all of us by fawning over this worldly leader. According to the tapes and the reports, one of them said to Mr. Trump, “We love you and we believe in you. You are doing amazing, amazing things.” Another added, “Now we have a warrior at the helm who is willing to stand up and fight. Amen. Sir, I commend you for your courage. It is an amazing thing. So, team — let’s fight and we’ll win. God bless you.”

Fight? To win what?

We’ve lost our way. We’ve lost who we are in Christ and where we live in God’s new creation.

This world that rewards you for putting yourself first, this world that promotes and glamorizes violence and greed, this world that divides people and motivates by fear and accomplishes its goals by force — this world is destined to die. It’s not going to last. It’s dying. Stop chasing it. Stop identifying with it. Stop defending its ends and using its ways.

Our crucified and risen Lord, our reigning and coming King, is the only one who will save us. He is our only hope. His ways are love and humility. His methods are sacrifice and service. His goals are mercy and grace and forgiveness and peace. His reign will ultimately prevail. His rule will eventually win the day.

America’s mid-term elections are not a referendum on Christianity. Give me a break.