Dance With Who Brung Ya 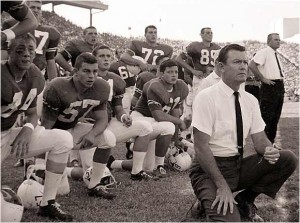 Darrell Royal, co-inventor of the Wishbone offense and two-time national championship coach of the Texas Longhorns, has died at age 88. During his 20 years as UT’s head football coach, Royal racked up a record of 167-47-5, including eleven Southwest Conference titles, ten Cotton Bowl wins, and undefeated national championship seasons in 1963 and 1969. I was ten years old when Royal stepped away from the sidelines to leave college football to the Barry Switzers of the world. So most of what I know about him I’ve only heard second and third hand or read in books or seen on TV. I did enjoy the great privilege of meeting Royal at a hospital fundraiser in Burnet back in 1993. I had my picture made with the winningest coach in Longhorns history and he autographed my invitation. A good friend, Larry Pate, framed the 3″x4″ card for me and it hangs on my office wall today.

Royal is remembered for his hard-nosed running attack and his disciplined defense. But he also gained a lot of attention with his folksy quotes and quips. Some of my favorites:

“Three things can happen when you throw the football, and two of ’em are bad.” ~on his unwillingness to install a sophisticated passing game at UT

“You dance with who brung ya.” ~on his refusal to give up on the Wishbone after a couple of tough losses in 1965

“No, he’s not very fast, but maybe Elizabeth Taylor can’t sing.” ~while defending a backup running back against a reporter’s criticism

Click here for a link to a whole bunch of other Darrell Royal quotes. Click here for the Sports Illustrated article on Royal’s life before, during, and after UT. In honor of the coach, order something off the menu today that sounds like “triple option.”

You might also be interested to know that the Houston Astros are going with a new logo and uniform design to mark their move to the American League. The new designs borrow quite liberally from the old historic ones — maybe only a die-hard fan could pick out the differences. But I like it. The orange star and the capitol “H” has always been cool. Someday, maybe during Spring Training in March, I’ll rant and rave about Houston moving to the AL West. It’s a travesty. It’s very nearly the abomination that leads to desolation. In the meantime, click here to watch a pretty cool video that highlights the Astros’ uni look from the old Colt .45 days of Larry Dierker, through the rainbow era of Ryan and Cruz, and the blue pinstripes of Bagwell and Biggio, to this brand new look worn by a bunch of players you and I have never heard of.

Carrie-Anne and the girls and I made the short drive to Tulia Friday to eat Mexican food with our favorite Ukranian missionaries, David and Olivia and Caleb Nelson. David and Liv are on furlough from their seven year commitment in Kharkov, spending several weeks with the Martins in Lubbock where Liv is about to give birth to their second child. The little boy (Luke? Lucas? Lucious?) is due in a week and Olivia needed some chili rellenos. We had such a great visit with this wonderful family. It was such a joy to get caught up on all the Christians and all the seekers C-A and I met during our two week trip to Kharkov in 2010. Re-living Victoria’s baptism into Christ, remembering Alexander, getting caught up with Valery and Andrei; it was such a blessing. We laughed together and we prayed. We marveled at their victories and sympathized with their struggles. We giggled at the mention of fish-flavored potato chips and gagged at the memory of a tall frosty glass of Kafir. I taught Caleb how to flip Froot Loops from the handle of a teaspoon. And we vowed to play a few marathon Phase 10 games together here in Amarillo before they head to Fort Worth after the baby is born.

God is using the Nelsons in a very difficult place. He’s working through them to spread the great news of salvation in Christ Jesus. He’s empowering their whole team by his Holy Spirit to advance the eternal Kingdom. We feel so very blessed to be their friends.

God bless his Kingdom outposts in Ukraine. God bless David and Olivia Nelson and their precious children. May our Father’s will be done in their lives and in Kharkov just as it is in heaven.