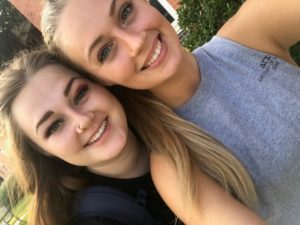 Before I get to a couple of sports points, here’s a first-day-of-school picture from Valerie and Carley who began classes yesterday at Oklahoma Christian University. This first-day selfie was taken before the tornado sirens interrupted dinner last night and forced them into storm shelters during the “inland hurricane.” Of course I phoned both of them early, way before their scheduled 9am classes, to sing “School Bells” and to say, “Work hard, learn a lot, be sweet.” I think they still appreciate that. Maybe.

Ezekiel Elliott is into the fifth week of his holdout, he is yet to sign the latest contract offer from the Cowboys, and I’m not sure where this is headed. There’s so much wrong with this stalemate between the NFL rushing champion and Jerry Wayne — so many weird twists, he-said-she-said stuff, and timing questions. But isn’t that just like the Cowboys? Nothing will ever make sense, it’ll all go against every football maxim and norm, it’ll blow up in the most agonizing way possible, and somehow Jerry’s Death Star will still sell out every Sunday and he’ll still make a jillion dollars and they’ll still go 8-8.

Jerry postures by claiming you don’t need a rushing champion to win a Super Bowl. How in the world would he know?!? He’s never won a Super Bowl without a rushing champion / league MVP and the last time he did that my two daughters at OC in the above picture weren’t even born! Since then, he hasn’t even won a single divisional round playoff game!

The Cowboys have reportedly made an offer to Elliott that is worth between what Le’Veon Bell and Todd Gurley are making, so somewhere between $53-60 million or $13-14 million per year. That would make Elliot the second highest-paid running back in the NFL. And he hasn’t said ‘yes.’ Who’s giving Ezekiel advice? He’s not in the last year of his contract; he has two years remaining. If he holds out the whole season, who’s going to trade for him or sign him to more money next year? If he plays this year and somehow he wins the league rushing title again and the Cowboys go a conference championship game for the first time in a quarter-century, wouldn’t he be in a much-better bargaining position?

This isn’t at all like Emmitt Smith holding out in 1993. Smith had only one year remaining on his current deal, he was a Super Bowl champion and MVP, and the Cowboys had the pieces around him to legitimately win another couple of titles. None of that is the case with Elliott. Ezekiel Elliot has been involved in more league investigations than playoff appearances.

And — people are forgetting this — after the Cowboys went 0-2 during Emmitt Smith’s holdout, he was in the best bargaining position imaginable. And the NFL’s all time greatest running back wound up signing the same deal the team had on the table all along.

I feel like I have to remind people at least once a year that I am not a Cowboys fan. I stopped rooting for the Cowboys when Jerry Wayne fired Jimmy Johnson and replaced him with Barry Switzer at head coach. I am a Houston Texans fan. It’s like rooting for the JV. It’s brutal. I mean, how bad does your organization have to be if you’re an irrelevant football team in Texas? I cheer for the Texans as a protest against Jerry Wayne and to spite ridiculous Cowboys fans. And it’s terribly lonely. It’s awful. I’ve made the five-dollar bet every year with our Central youth minister — Tanner in the past, Josh now — that Houston will finish with a better record than Dallas. And I’ve won that bet four out of eight years. But they’re just as bad as Dallas. No divisional playoff wins. For almost two decades, the same level of success as the Redskins and the Bills.

Now Lamar Miller is out for the year after tearing his ACL on his first carry of the preseason and they’re refusing to pay Jadeveon Clowney. The only intrigue or suspense for me this year will be in which team, Dallas or Houston, goes 9-7 and which team goes 8-8. Just like last year. And the years before.