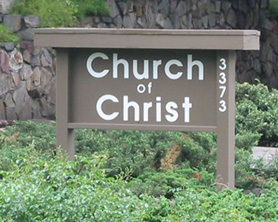 Acknowledging together that we in the Churches of Christ must do something different if we’re going to remain a viable witness to the Christian faith in our rapidly changing world, we’re spending our time here reviewing and reflecting on Leroy Garrett’s “What Must the Church of Christ Do to Be Saved?”

In the 18th chapter, Garrett returns to the subject of women he addressed in chapter nine:

Bring women into the church.

Although Garrett gets much more into the “women’s role” passages in Corinthians and Timothy here than he did in the previous chapter, his focus in this essay is on Paul’s universal statement (creed?) in Galatians 3:28: “There is neither Jew nor Greek, slave nor free, male nor female, for you are all one in Christ Jesus.”

If that passage means anything it means that gender is not to be made a test of fellowship or ministry, such as, “She can’t do that because she is a woman.” Paul himself may have sometimes fallen short of that ideal of perfect equality, due to the pressures of custom, as in the case of slavery, which he tolerated, and which is forbidden in that same passage, “There is neither slave nor free.” If socio-economic conditions had been different, Paul might not have said what he did about women and slaves, tolerating their unequal treatment.

To put it another way, Paul almost certainly would not say to the 21st century church what he said to the first century church about women and slaves. But still he laid down the principle that applies to all generations because it so reflects the mind of Christ: In the Church of Christ there is to be no distinction between slaves and freedmen, Jews and Gentiles, men and women! We have to recognize that this was the ideal that even he was not always able to effect due to the conditions beyond his control.

Despite Paul’s clear directive here and his similar admonition in Colossians 3:11, the Christian church in America used the Bible for decades to justify slavery. Wherever slavery is mentioned in Scripture as the current conditions in society at the time of the writing, those passages were used by Christians to say, “Well, God didn’t condemn it in that Scripture; it must be OK. Or at least, it’s just the way things are.”

Today the practice of slavery is officially, socially, morally, and publicly condemned in every corner of the United States. Our churches now preach against slavery, loudly abhor the idea of slavery, and lament the behavior of our forefathers who justified it. What changed? Scripture certainly has not changed. Our God has not changed. The evil of slavery has not changed. What’s changed is our society. That’s what’s different now. For an American church today to actually uphold the idea of slavery and teach and practice in favor of slavery is unthinkable. That church would not do very well at evangelizing. That church wouldn’t grow. That church today wouldn’t have much credibility when it came to proclaiming the good news of salvation in Christ Jesus. Who would listen to a church like that?

Regardless of the ways you might interpret 1 Corinthians 11 and 14 or 1 Timothy 2, we all agree that the social conditions that existed then in first century Corinth and Ephesus do not exist today in 21st century America. It’s vastly different. It is certainly not a shame for a woman to speak in public. It’s not a disgrace for a woman to teach in a room full of men. It happens all the time. Women are just as educated as men, just as capable as men, just as qualified as men. Nobody blinks when a woman is named president of a major university or CEO of a global corporation. Your professor or your police officer or your accountant or your doctor is just as likely to be a woman as a man. The cultural conditions to which Paul wrote in Corinth and Ephesus do not exist in America today. It’s different. It’s changed. For an American church today to actually uphold the idea of man’s superiority and teach and practice in favor of denying women leadership and teaching roles is unthinkable. That church would not do very well at evangelizing. That church wouldn’t grow. That church today wouldn’t have much credibility when it came to proclaiming the good news of salvation in Christ Jesus. Who would listen to a church like that?

OK, is that a little strong? Maybe. I hesitated to write it that way, but I think I need to in an effort to at least present the possibility that the two issues are the same in Paul’s eyes. Afterall, in speaking to the Galatians he uses both examples in the same breath.

Garret points out that we are very good at drawing lines according to our own preferences and comforts. Foot washing is both a command and an example in Scripture, but we decline to practice it because it only applied to that biblical culture during that biblical time. Same with the holy kiss. In Acts 15, the church council claims the Holy Spirit himself gave them four commands that had to be followed by all Gentile Christians. We completely ignore the first three! And I’m not so sure we even take the fourth one very seriously.

1 Timothy 2:8 tells men everywhere to lift up holy hands in prayer, without anger or disputing. It’s a command. Is it then, that all men who do not lift their hands while they pray are sinning against God and his Church? No! Of course not. The command is to pray; lifting hands was the customary and cultural prayer posture of the day. Does that mean that it’s OK for the women to be angry and to dispute? No! It’s that the men were apparently the problem in this particular Ephesian church, not the women.

1 Timothy 2:9 tells women to dress modestly, with decency and propriety, not with braided hair or gold or pearls or expensive clothes. Does that mean that all women who braid their hair are sinning against God? No! Of course not. It’s cultural. The command is to dress appropriately for the culture in order to preserve your Christian witness to a lost and dying world.

1 Timothy 2:11 says women should learn in quietness and submission; women are told not to teach or to seize authority from a man; women must be quiet. Does this mean then that a woman who speaks in church is sinning against God?

Our task in the 21st century is not to do precisely as they did, but to do for our generation what they did for theirs, bring in the Kingdom of God. And our men and women should be at it today just as their men and women were at it back then, but not necessarily in exactly the same way.

What I want for the Church of Christ down the road is that there will be no social, racial, or sexual lines drawn. None whatever. Liberties and ministries will be shared equally and indiscriminately, according to gifts and talents. We must overcome the mentality that half (or more) of the church is to be subservient to the other half. All because of gender! Christ has made us one and we are all equal — and half of us are not more equal than the other half!