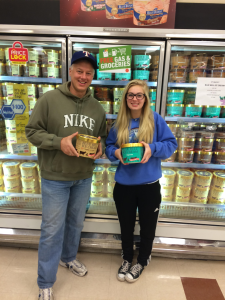 It wasn’t quite the fanfare the drivers of the Blue Bell delivery trucks experienced several weeks ago when they reintroduced our state’s most beloved ice cream to the stores in Austin and Dallas and even Wichita Falls. Let’s be honest: it wasn’t even close. There were long lines at those supermarkets in the Hill Country, limits of two half-gallons per customer in DFW, large crowds and colorful banners and creative cheers — certainly the appropriate level of hysteria that should properly accompany the return of Blue Bell after a nearly nine month famine.

A little bit of a different story here in Amarillo. Carley and I were there at 4:45 this morning to greet the Blue Bell truck at the United Supermarket at 45th and Bell. But… I think we were the only ones. We photographed the truck and took selfies with the drivers. We were warmly greeted by the cashiers and stockers who looked like they were anticipating a bit of a larger crowd. But… I think everybody slept in. 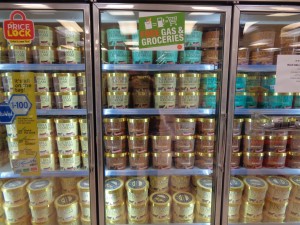 Carley and I walked to the freezers at the back of the store and beheld the glory of the stocked cases, the gold rims almost mesmerizing atop those perfectly aligned cartons of wonderfulness. Truly beautiful. While we were taking pictures and deciding if Carrie-Anne would really eat a full half-gallon of Butter Pecan by herself, a pre-teen girl grabbed a couple of cartons and another woman who was doing big grocery shopping impulsively grabbed a couple of half-gallons herself. I don’t think it was on her list. So, yes, the cashier was happy to tell us on the way out that we were indeed the third Blue Bell customers of the day. 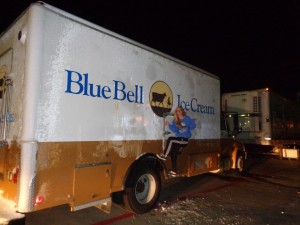 On to the house, where Carley and I grabbed the biggest spoons we could find and dug in to the Cookies and Cream and the Peppermint. Blue Bell for breakfast. At 5:30 in the morning. Ted, yes! 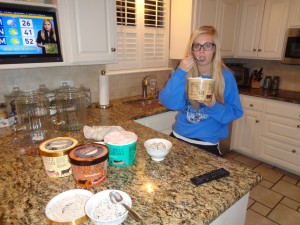 Today, Amarillo is a little more like really living in Texas.