We know there’s a battle going on between good and evil. We understand the conflict. We get it. Forget the TV and newspaper and the internet. There’s horrifying evidence of the evil on every channel, on every page, on every website. Forget that. Let’s acknowledge that we’re all personally caught up in it. We understand it personally because we’re dealing with it right now. Broken families. Bad news from the doctor. Pink slips at work. Addiction. Rebellious kids. Divorced parents. Intimidation. Depression. Hopelessness. Things are not the way our Father intended. We know that.

We’re in the middle of a cosmic war.

Our merciful Father knows that, too. He understands it. That’s why he gives us a beautiful vision of the already-determined outcome of the battle. He shows us the ending.

God gives it to us in Revelation 20: the battle of Armageddon. Satan calls together all the wicked of the world, all the evil in the universe. They come from all four corners of the earth. They’re gathering for battle against God’s children:

“In number they are like the sand on the seashore. They marched across the breadth of the earth and surrounded the camp of God’s people, the city he loves.”

Looks bad for God’s children. They’re surrounded. No escape. Out flanked. Outnumbered. Outmanned. Out of luck. It’s over.

“But fire came down from heaven and devoured them!”

There is no battle of Armageddon. Look it up. Revelation 20. There’s no battle. Satan never even touches the saints. None of God’s children are harmed. Not even a scratch. It’s like Jesus rides up on his white horse and says, “Make my day.” Boom! It’s over. We don’t fight anything. We don’t have to. That’s the Lord’s job. 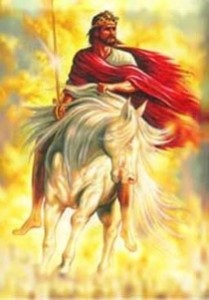 Of course, it’s against our nature to sit back and let God do the fighting for us. The picture in Scripture of what it looks like for us to oppose the evil in our world is not typically the way we handle things. Instead, our first inclination is to politic. Picket. Petition. Boycott. Lobby. Threaten. We think if we show enough force, if we gather enough power, we can defeat evil by voting correctly or by supporting the right platforms together or by pushing the proper laws through worldly systems.

The ones who are called “conquerors” in Revelation, the “over-comers,” are the ones who have submitted faithfully to suffering and death, totally trusting in God to deliver. God’s children are the ones who live in patience and mercy and grace and trust God completely to take care of the battle.

We don’t wait to acknowledge the complete and sovereign rule of God. We acknowledge it and we submit to it right now. And we witness, we testify. We change the world. Not by power or force or influence. But by patience and gentleness and mercy and love. By faith and loyalty in our God and his victorious Christ. And, yes, even by some suffering. For a little while.

Ephesians 2 says we are already, right now, seated with Christ in the heavenly realms. We are. So we live like it.