This short, jam-packed phrase come in the context of our adoption by God as his sons and daughters. We are children of God through faith in Christ Jesus. We are one in Christ Jesus. We are Abraham’s seed, we’re heirs according to the promise, we have rights as God’s children, we have the gift of God’s Spirit, we have an intimate relationship with God as our ‘Abba’ Father. To be known by God is to belong to God.

“God’s solid foundation stands firm, sealed with this inscription: ‘The Lord knows those who are his.'” ~2 Timothy 2:19

Paul is quoting from the Old Testament here, from somewhere in Numbers, I think. The foundation of who we are in Christ is solid, it’s rock, it’s forever. The seal is about ownership, who owns us, who we belong to. The seal and the foundation mean that God is enough to sustain us no matter how bad things get. No matter the destructive forces attacking us, no matter the evil that threatens to overwhelm us, God knows you and you belong to him.

Jesus says the same thing in the fourth Gospel: 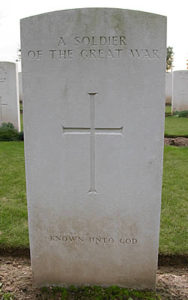 During World War I, the British were trying to figure out how to designate the remains of soldiers they couldn’t identify. Rudyard Kipling suggested that every grave of an unidentified British soldier be marked with the words “Known Unto God.” For those of us in Christ, for all who are connected to Jesus by baptism, that is a message of hope and assurance that we are known by God and given a value and a security that not even death can take away.