And The People Rejoice! 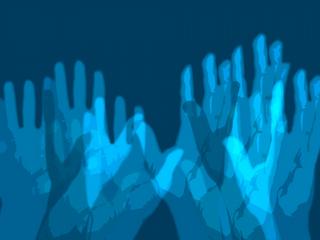 The Incarnation of God is a most astounding, literal, historical, and theological event. The coming of our God in the flesh, as a helpless human baby born to peasants in a livestock stable, is real. It really happened. The Creator became one of the created. The Perfect became sin. The Immortal became mortal. God is with us!

Jesus in the manger is not a messenger or an ambassador sent from God to earth to fix everything; he is actually God in the flesh. God doesn’t send his assistance from heaven; he actually bears our burdens in himself. God doesn’t look down on us in love; he actually comes here himself to join us.

God comes to earth and he walks our streets, touches our people, hugs our kids, and eats with us. He laughs with us and he cries; he teaches and heals and protects. He loves us. He saves us. He brings with him the eternal Kingdom of glory, the Kingdom of everlasting peace of which there will be no end, and gives it to us. 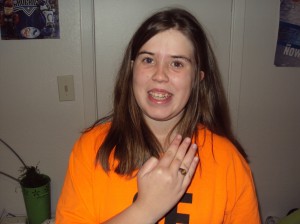 It was quite the ordeal getting the ring changed. Of course, we had already ordered her Richland High School ring — and paid for it — before we realized God was shipping us up here to Amarillo. But with Carrie-Anne’s persistence, the Rebel red stone was exchanged for the Sandies gold, all the lettering was adjusted, and Whitney’s finally sporting her Amarillo High School ring. And she’s so very proud.

Whitney has really thrived here at AHS. This move has been good for her. She’s involved in FCA, Student Council, and the Key Club. She’s driving to and from a different meeting or party almost every week. And she’s making such good grades, she’s exempt from every one of her semester finals this week. Even Coach K’s Economics class!!!

I’m proud of you, Whit. You’re doing great with what, I know, has been a difficult transition to a new school in a new city with new friends right before your Senior year. But you’re doing great. And our God is also doing something great with you. In you. I can see it. It’s there. He’s changing you and shaping you into the selfless, sacrificial, serving nature of his Son. And it’s awesome!

A very disappointing “blizzard” overnight. Just barely an inch of snow. Super cold temps and a brutal wind; but hardly any snow at all. Weathermen here are just as befuddled by winter forecasts as they are in DFW.