This billboard went up last week on the Canyon E-Way just north of 45th Street in Amarillo: 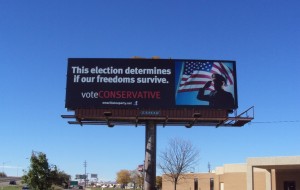 It’s an unabiguous, unapologetic scare tactic. The clear intent of this message, and ones like it that bombard us through every broadcast, internet, and print medium available, is to scare citizens into shifting the power to or keeping the power with one particular political party. Local TV stations use scare tactics to get us to tune in to their newscasts. You’ve seen the teasers during your prime time network shows: “Something in your kitchen is putting your family at great risk. We’ll have the full story tonight at 10:00!” Lots of businesses and professional services use scare tactics in their advertising. Apparently, it works. But it’s certainly the number one default mode of operation for political candidates and campaigns: scare the voters into doing what we want them to do; motivate the public by fear to act in our best interests.

Isn’t it good to know that we Christians are immune to the scare tactics? Isn’t it comforting to know that we serve an almighty and loving King and that we belong to an eternal Kingdom that can never fall? Isn’t it a wonderful truth that we aren’t afraid of anything?

“For you did not receive a spirit that makes you a slave again to fear, but you received the Spirit of sonship.” ~Romans 8:15

One week from tonight, there may be a brand new “leader of the free world.” Or, perhaps, the “leader of the free world” will be the same guy it’s been for the past four years. I have no idea who’s going to win and you don’t, either. I don’t know how in the world either candidate can accomplish anything that’s going to make that big a difference economically or morally or medically. I don’t know how either party can solve the United States’ epidemic problems with crime and violence and ignorance and poverty and divorce and abortion and addiction and war. I don’t know how either side can fix much of anything.

But I do know this. I do know one thing. We are children of YHWH, the almighty and eternal God. We serve a God who raises up and tears down nations to use them for his glory. We serve a God who brings earthly rulers to power and uses them for his purposes. We serve a compassionate and merciful God who reigns sovereign today over the entire universe he created. And as his people, we do not place our trust in political parties. As his children, we do not seek our security in partisan candidates. We trust in the name of the Lord our God!

Though the earth explodes and the heavens crumble, we trust in the Lord our God. Our God is “the great King over all the earth.”

“God reigns over the nations; God is seated on his holy throne.
The kings of the earth belong to God; he is greatly exalted.”
~Psalm 47