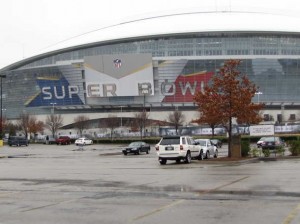 So the NFL has given in to Jerry Wayne’s crazy plan to set a Super Bowl attendance record at his ostentatious behemoth of a stadium on February 6. You’ve heard about this, right?

With the temporary seats added in the upper decks of the end zones, Jerry’s Stadium will hold right at 93,500. The Super Bowl attendance record was set in 1980 at the Rose Bowl: 103,985 to watch the Steelers beat the Rams in XIV. So the Cowboys owner has concocted a strange little ruse to push the numbers in Arlington just past the mark.

They’re selling at least 10,000 tickets to a “party plaza” located on the east side of the stadium where suckers who want to be a part of the “Super Bowl experience” can pay $200 each to stand around and watch the game on big screens in the parking lot. This plan was part of the North Texas Super Bowl bid submitted to and approved by the NFL way back before the stadium was even built. That’s always been part of the deal. And I don’t begrudge Jerry or the league any of it. Please, go sell as much stuff as you can. These tickets don’t allow the holder to enter any part of the stadium itself. They’ll be able to take nice pictures of the stadium’s exterior before and during the game, but they won’t have a sight-line to any live football action. However, I’m sure there are plenty of people who will pay the $200 to stand in the parking lot and watch it on a screen.

That’s fine. I don’t understand it. But I have no problem with it. Free market economics. Capitalism. It’s what makes America great, I’m told.

But the NFL has announced that they’re going to count these parking lot partiers in the overall game attendance figures. They’re all going to count as being at the Super Bowl. And Jerry’s Stadium is going to break the record.

You may as well count the guys watching it on the TV in the bar at Chili’s down on Cooper Street. Whoo-Hoo, we’re at the Super Bowl! What’s the difference?

In this world where Facebook friends count as meaningful relationships, forwarding emails to your representative counts as serious political discourse, googling counts as thoughtful research, and texting your kid counts as being connected, I suppose I shouldn’t be surprised. But I’m actually shocked. This cheapens the whole thing. It discounts all of it. No, I’m sorry. You were not at the Super Bowl. You stood in the parking lot and watched it on a big TV.

Here’s Jerry’s quote: “This Super Bowl, very likely, will be one of the largest events ever witnessed on this planet.”

One more thing about the Super Bowl: the Steelers cannot play in it. It absolutely cannot happen. I can’t imagine anything much worse than having thousands and thousands of obnoxious Steelers fans all over our part of DFW, screaming “DEE-FENSE! DEE-FENSE!” and hollering “Here we go, Steelers, here we go!” and waving those ugly, ugly Terrible Towels. The only thing worse than that would be the Steelers actually winning the game and hoisting the 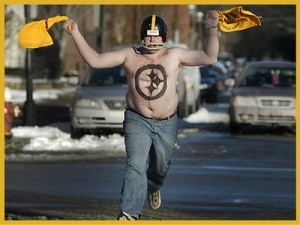 Lombardi Trophy on the Cowboys home field. Can you imagine that scene? Steelers fans cheering a Pittsburgh championship inside the Cowboys stadium?

It would be a great hour of darkness.

A lot has gone wrong in this 51st season of Cowboys football. But that would be the worst. Utter shame. Complete disgrace. The franchise made famous by Bradshaw, Lambert, Stallworth and Swann and currently captained by Ben-R can’t play in a Super Bowl here.

I don’t like Rex Ryan. Not even a little bit. But I’m loving his team on Sunday.