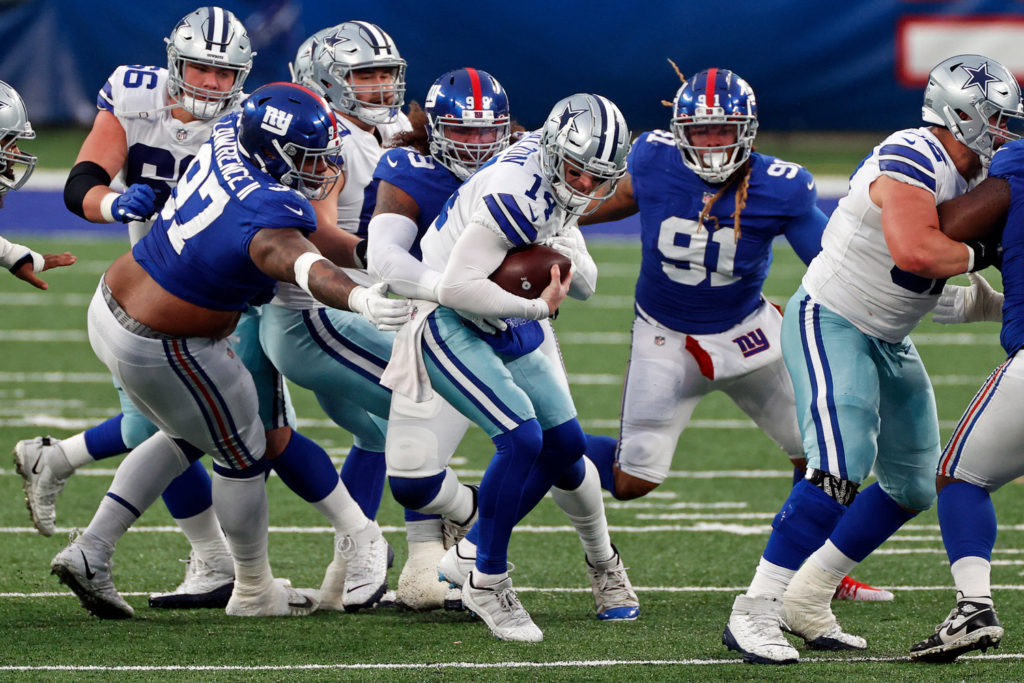 Which would be more of a devastating gut-punch to the Cowboys? To lose to the Giants at the very last second in a dramatic catastrophic collapse? Or to come from behind to beat the Giants, pack up and fly to DFW, think about the next week’s potential playoff opponent during the flight, drive home, sit down in front of the TV, and watch the Eagles jump offsides on Washington’s fourth-and-one to hand WFT the NFC East and get knocked out of the playoffs at 10:30 at night?

I think scenario #2 would have been a lot more fun, but history dictates it was always going to be scenario #1.

Either way. So juicy.

Trailing by four points a little over midway through the fourth quarter, Dallas started at their own 25-yard line and methodically marched to the Giants seven. Confidently. Triumphantly. The Cowboys overcame three third downs and converted a fourth-and-two on what was an unheard of 17-play drive. It felt like some kind of devilish destiny. The Cowboys are terrible, but the Giants, yes, are probably worse. It looked like Dallas was going to win this lousy game and subject all of us to another week of the Mike McCarthy inspiration tour. In the driving sleet in an empty Giants Stadium, Dallas had a first-and-goal at the New York seven yard line. I felt sick to my stomach.

But, then, history took over and all was made right in the football world.

Dalton said after the game he was throwing it up for grabs, hoping somebody would make a play. He told reporters he wishes he had thrown the ball out of bounds since it was only third down. Hmm. Sounds reasonable.

We all should have seen it coming. We knew the Cowboys weren’t going to punch it in there. Of the myriad Cowboys issues this season, one of the more glaring is their inability to score touchdowns inside the Red Zone. Dallas took four trips inside the New York 20-yard line yesterday and came away with only one touchdown. Each of the other three trips was stymied by a Dalton sack. Dallas scored touchdowns on only 27 of their 54 Red Zone opportunities this year. Too many field goals. Too little imagination.

The longer historical narrative should also have comforted us. The Cowboys always lose when they’re playing a divisional opponent in the season finale with a playoff spot on the line. Five times since 2008, Dallas has needed a win against another NFC East team on the last day of the season to qualify for the playoffs, and all five times they have lost.

So, the next time it happens, maybe as early as next season, you can bet on Dallas to lose to WFT or WFC or whatever Snyder’s calling that outfit then. And it’ll be just as satisfying.