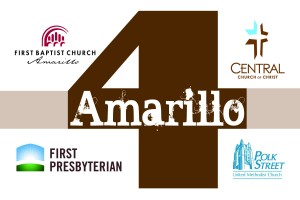 Four guys walk into a bar: a Baptist, a Methodist, a Church of Christ, and a Presbyterian… that’s a joke.

Four sets of ministers and elders walk into a church building to pray: Baptist, Methodist, Church of Christ, and Presbyterian… that’s not a joke. It’s the holy will of our God and a magnificent witness to our city of the power of Jesus! And it’s happening this evening!

“I pray also for those who will believe in me through [the apostles’] message, that all of them may be one, Father, just as you are in me and I am in you. May they also be in us so that the world may believe that you have sent me. I have given them the glory that you gave me, that they may be one as we are one. I in them and you in me. May they be brought to complete unity to let the world know that you sent me and have loved them even as you have loved me.” ~John 17:20-23

We believe that it is God’s will that all his children, all disciples of his Son, be reconciled. We think God’s great desire is for all Christians to be brought together as a powerful witness to the world of his love and peace. You know, this is in our Church of Christ DNA. It was established in the opening lines of Thomas Campbell’s Declaration and Address, the charter document for our Restoration Movement, written in August 1809:

“That it is the grand design and native tendency of our holy religion to reconcile and unite men to God and to each other in truth and love to the glory of God and their own present and eternal good will not, we presume, be denied by any of the genuine subjects of Christianity.”

The whole document is about reconciliation, the kind of reconciliation that drives God’s eternal plans. The very ministry of reconciliation he’s given those of us who profess our faith in him. The words in the document are bold and aggressive. And they ring with undeniable beauty and truth. They call for a swift end to all divisions among those who follow Jesus:

“Has the Captain of Salvation sounded a desist from pursuing this deadly enemy that is sheathing its sword in the very bowels of Christ’s Church, rending and mangling his mystical body to pieces? Has he said to his servants, ‘Let it alone?’ If not, where is the warrant for a  cessation of endeavors to have it removed?”

Campbell claims that tearing down the walls and uniting with all our brothers and sisters in Christ is a matter of universal right, a duty belonging to every citizen of Zion. And while the work will be difficult and the opposition will come mainly from within the church establishment, Campbell says it is God’s will. It is the Church’s will. It is the will of those who’ve gone before us:

I thank God for the Campbells and the Stones and the other giants of the faith who latched on to God’s holy will as revealed to us in Scripture and would. not. let. go. I thank God for the ecumenical spirit of the Central Church of Christ toward our brothers and sisters in other Christian churches in our city. I’m grateful for the willingness here — the eagerness! — to unite with other Christ-followers.

This evening, the Central elders and ministers are meeting at Polk Street Methodist Church with their elders and ministers and with the elders and ministers from First Baptist and First Presbyterian to spend one-and-a-half hours together in prayer. We are forming an alliance, a partnership. We’re calling it “4 Amarillo.” It’s a hopefully obvious play on words. Four churches breaking down our walls, putting aside our differences to unite for the sake of our city. 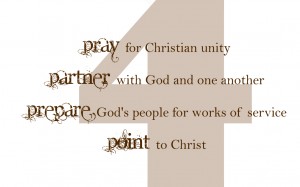 We’re not 100% sure what this looks like yet. This August, we want to join together to serve our downtown area elementary schools. We’d like to serve and worship together during the Thanksgiving and Easter holidays. We’re going to swap pulpits with one another. We’re thinking we’d like to build some Habitat for Humanity houses together.

We do believe that this partnership between denominations will be a powerful witness to our city that Jesus really is the Prince of Peace, that he really does possess the power to reconcile and unite. Jesus says in the middle of Matthew 18 that if two or three people will come together and agree on anything, he’ll show up just to see that! And we believe he will.