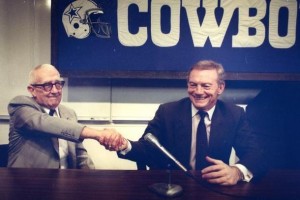 Where were you 25 years ago today? When you first heard the news of the great tragedy, where were you? What were you doing? Who were you with? On that Black Friday, February 25, 1989, when Jerry Wayne bought the Cowboys and fired Tom Landry, where were you and what were you doing? I was a senior broadcasting major at Oklahoma Christian College, in my last semester, sitting in my apartment after lunch, getting ready for a 2:00 class. A roommate and great friend of mine, Mike Osburn, was the first to deliver the news. He told me: Tom Landry has been fired. And I didn’t believe him. Mike had heard about it while passing through the student center after lunch. Somebody had heard it on the radio. And I didn’t believe him. We didn’t have cable on the TV in our on-campus apartment. Besides, even if we did, ESPN was brand new and showing Australian Rules Football seemingly around the clock. There were no sports radio stations in Oklahoma City. No internet. So I called my mom, long distance, on a land-line phone, to confirm the information. She told me that KRLD was reporting the same news and that a press conference was happening at around 5:00.

Ah, yes. “Socks and jocks.” Oklahoma City television didn’t run that press conference live like they did on both radio and TV in Dallas. I only saw the highlights at 6:00 and 10:00. Tex Schramm sitting in a folding chair in a back corner of the stage. The introduction of Jimmy Johnson. The bumbling and stumbling explanations of the botched firing of the only coach the Cowboys had ever had.

To help you reflect on your own feelings and emotions relating to that horrible day, I’ve included a couple of links here to some pretty good reading material. First, Tim Cowlishaw, the excellent Dallas Morning News columnist, has written a piece about Jerry Wayne’s recent apology for firing Landry. Cowlishaw makes the point that Jones has apologized for the wrong thing. He should apologize to Cowboys fans for his performance as the team’s general manager. But, alas, that apology, the only one that would count, is never going to come. Cowlishaw’s column is here.

John Henry has written an interesting time-line piece for the Star-Telegram that highlights all the highs and lows of Jerry’s ownership of the Cowboys. It’s lengthy, but it provides lots of reminders of just what a mess this franchise has become with Jones at the top. You can find it here.

To commemorate the occasion, why don’t you make a couple of really horrible decisions today at work, and then film a commercial for Papa John’s Pizza.