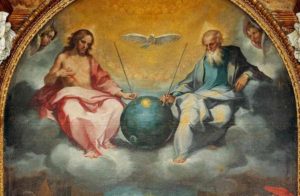 “In Christ all the fullness of the Deity lives in bodily form, and you have been given fullness in Christ, who is the head over every power and authority.” ~Colossians 2:9-10

And then I turn on the news. Violence. Death. War. Abused women and children. Racism. Hundreds of thousands of refugees being driven from their homes and nobody wants to take them in. Corrupt governments and politicians. Hunger. Disease.

It doesn’t feel like he’s running anything. It doesn’t look like he’s in charge. The grand spectacle of the ascension — Jesus lifted up to heaven right before the disciples’ eyes to become the sovereign ruler of the universe — seems to mean very little in our real lives today. It doesn’t look like Jesus is in control. If he is, he’s making a huge mess of it.

So, where is Jesus? What does it really mean that he is raised up to heaven and seated at the right hand of God?

Luke says Jesus was taken up into the sky, into the clouds. What does that really mean? Well, when a student moves “up” from tenth grade to eleventh grade, that doesn’t mean the eleventh grade classroom is on the floor above the tenth grade classroom; it might just be down the hall. If a salesman makes the move “up” to manager, he might get a new office on the top floor, but that’s not what that means. When George Jefferson was “movin’ on up,” it was to the East side, not the North. George and Weezy did move into a deluxe apartment in the sky-hi-hi — but that’s not what it means to move “up,” to physically be a few feet farther away from the ground.

When the Bible talks about heaven and earth, it’s not talking about two different locations in the same time and space dimension like Amarillo and Israel or even Houston and Mars. And it’s not talking about a non-physical world versus a physical world. It’s more like two different types of time and space and matter altogether. It’s a parallel world: very, very real and existing in another dimension.

You know, we’ve got a lot of movie makers and writers who are very good at taking us into these parallel worlds and places. But we don’t think that way when we think about Jesus. C. S. Lewis did a great job with the Narnia stories of illustrating how two totally different worlds can relate and interlock. And that’s still the best way, I think, for us to understand it.

Some of the oldest and best church buildings try to illustrate this with the architecture. We’ve kinda got something like that working in our worship center here at Central. We’ve got a soaring ceiling, reaching and stretching far above us. Down on the floor we get a sense of belonging in the room, but we’re not actually physically occupying any of the great space of light and beauty high above us. Our songs and our prayers go up there and occupy this great space above us, but we ourselves cannot physically go there yet.

What that’s supposed to help us understand is that because our Lord is in heaven and seated at the right hand of God, God’s space and ours are not very far away from each other. They’re very different, yes, but they’re close. There’s a relationship, a connection. God’s very real time and space and matter intersects and interlocks with our very real time and space and matter all the time.

“That power is like the working of his mighty strength, which he exerted in Christ when he raised him from the dead and seated him at his right hand in the heavenly realms, far above all rule and authority, power and dominion, and every title that can be given, not only in the present age but also in the one to come. And God placed all things under his feet and appointed him to be head over everything.” ~Ephesians 1:19-22

It’s all Jesus. He decides what happens and when. From heaven. “All authority has been given to me,” he says, “in heaven and on earth.”