Next to insuring all three of our vehicles were outfitted with GCR’s Love Like Jesus stickers, my priority this week has been to finally replace the Amarillo Sod Poodles sticker on the back of my truck with a sticker proclaiming my allegiance to our new city and our new team, the Midland RockHounds. I certainly needed to take care of this chore before last night’s series opener between the RockHounds and Sod Poodles here in Midland. And I did. 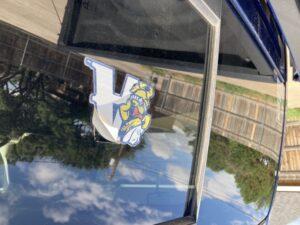 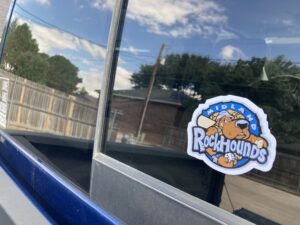 Drey is the number one draft pick of the Arizona Diamondbacks out of Ball State and was only called up to AA Amarillo less than three weeks ago. And he celebrated his 24th birthday last night here in Midland by paralyzing the RockHounds. He pitched 7-1/3 innings of five-hit shutout baseball with no walks and twelve strikeouts in a crisply played 1-0 game. I’m a RockHounds fan now, but I caught myself rooting for this Amarillo pitcher. His fast ball was consistently 96-97mph – his 12th strikeout in the 7th inning was clocked at 96 – and his curve came in at 76-77mph, with almost nothing anywhere in between. He occasionally brought an 85mph slider, but it was the other two pitches, dramatically different in speed, that kept the RockHounds off balance all night. And Jameson’s pin point accuracy. The kid was just ON last night. And nobody in a Midland uniform had a chance.

If you’re in Amarillo, I’m urging you to watch this kid pitch before the season’s over. Don’t let him get away because he won’t be a Sod Poodle for long. I’m guessing he’ll be pitching for the Diamondbacks in less than two years. He’s got 31-strikeouts now in his three AA starts. And he’s electric.