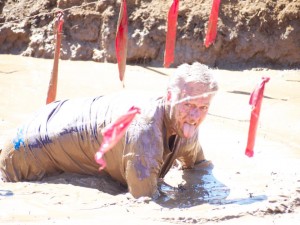 My thighs are still burning today with every step, I’ve pulled something in my right shoulder blade area that I’m still feeling with every breath, and I’m still wiping mud out of the corners of my eyes and coughing up dirt balls. But Warrior Dash was an absolute blast. And we can’t wait for next year’s.

It was mainly the same crew from Legacy that ran last year’s event down in Roanoke, a couple of blocks east of the Texas Motor Speedway. Twenty of our dearest friends, ranging in age from 15 to… well… let’s say around 50… and ranging in degrees of fitness from superstar athletes like Hudson and Jordan to out-of-shape desk jockeys and preachers like me. It’s a 5K (a little over three miles), through an obstacle course, in the mud. And, yes, even though this crazy event appeals much more to people half my age and who drink much more than just Diet Dr Pepper, we always have a great day at Warrior Dash. And this year was no different. 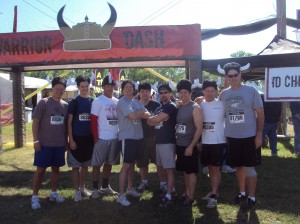 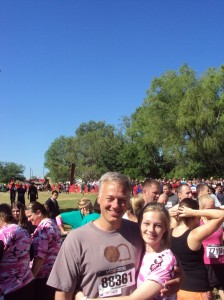 Valerie had a couple of buddies her own age show up to run with her this time, although I”m not sure Samantha and Shannon really understood what they were getting into. As race officials were herding us all into the line for our 10:30 am start, Samantha got a first look at the huge video monitor showing highlights from last year’s Warrior Dash and started flipping out. We tried to assure her that, while it may look lethal, she probably wouldn’t die. 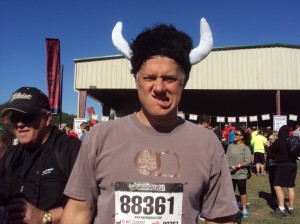 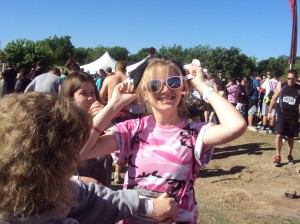 We donned our complimentary warrior helmets and took all the obligatory pre-dash pictures and then decided, probably a little too late, we needed to stretch. Yeah, for most of us it was way too late for that. Before we knew what was happening, we were counting down from ten and then running under a couple of fire-belching cannons on top of the starting gate. We were off!

Last year I had tried to keep up with Hudson, which lasted about half a mile. This time I was going to be in a better situation. Steve, Keith, Mike, Tracy, Kevin, and I had planned beforehand to run/jog this thing together. My only concern was besting my time from a year ago (43:42) and finishing without injury. Early on, neither of those goals appeared to be realistic. The recent rains in DFW made the course wetter and slicker and grosser than the year before. Just a little over a hundred yards in, Tracy bit it. Big time. I think he might have been wearing his yard work shoes. You know, the old tennis shoes, grass stains on the toe and the sides, missing that first crucial layer of sole? Tracy went down hard on his right side, almost taking Mike and me down with him. But, thankfully, he popped back up, only to discover he was now carrying about 40-pounds of extra weight in mud caked to his right leg and arm. We were all a little more careful after that.

About halfway through the course our party of six broke up a bit. Kevin and Mike kept running/jogging while Tracy and I found ourselves increasingly jogging/walking. At one point along the course, a huge sign meant to encourage participants screamed at us, “Are You A Warrior?!?” To which Tracy replied out loud, “Do warriors walk?” We were definitely walking in spots. But at least we were ahead of Steve and Keith. (We’d better be; Keith’s still recovering from a hip replacement surgery.)

So we crawled through the pits, scaled the cargo net walls, climbed the rope which had a couple too few knots in it, manuevered under all the barbed wire, walked/swam through the chest-high water/sludge/sewage, slid down the poles, and climbed more hills than I remember from last year. In fact, they put up a huge hill and and that massive Warrior Wall thing to climb back-to-back right before the fire jump. Now, the flames are only about knee high. But as I approached the double fire jump I was thinking, man, my legs are too tired. I’m not sure I can do this.

The final obstacle is the famous mud pit. It’s right at the finish line, right where hundreds and hundreds of spectators gather to cheer and jeer and take pictures, and right where a participant is the most tired and most unwilling to put up with any nonsense. So, of course, that’s the best place to watch.

Nothing like crawling through the mud and the slime, concentrating on staying low so as not to snag the seat of my britches on the barbed wire, and hearing Whitney and Carrie-Anne laughing. And Carl Ball. Thank you. The most impossible part of the whole course was getting out of that mud pit. It was so slippery and gross and I was so tired (and gross) I almost didn’t make it. I think I lost ten seconds clinging with three fingernails to a tiny root of a little dandelion on the side of that hill, praying that I wouldn’t slide backwards back into the gunk.

Tracy finished about ten seconds ahead of me. As usual, Hudson and Jordan had already showered and were prefectly clean and groomed, hair gel and everything, by the time I got out. Jerks. Steve and Keith were a couple of minutes back. Valerie and her crew of girls were another ten minutes or so. And then the ladies entertained us all with their fantastic finish about an hour after we began. 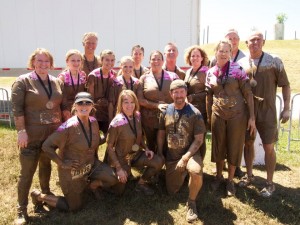 We took all the “after” pictures together, froze half to death in the barely adequate Warrior Wash, rode the shuttles back to the cars, and then gathered at Mooyah Burgers for a late lunch where we could get all our stories straight. Sandy maybe really actually broke a rib on that very first obstacle, the balance beam thing that teeters up and down about ten feet off the ground. I should hear about that before the day’s over. Everybody else though, as far as I know, is suffering mainly from scratches on our knees, sore legs, and a few stretched muscles. I would say, too, we all feel a tremendous sense of accomplishment. And we’re all already making plans to do it again next year. Carley will be old enough to participate next year. And Carrie-Anne’s already said that if Carley does it, she will, too. 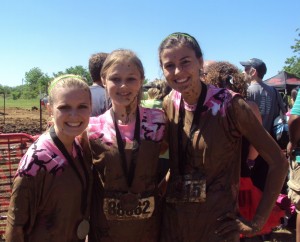 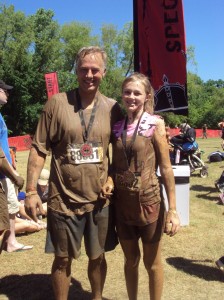 While checking my official time in the results tent, I ran into Bradley Bledsoe, one of our good brothers here at Central. We were both very surprised to see each other there; it’s so out of context for both of us. I asked him, “Man, what are you doing here?” He answered, “The same thing you’re doing; trying to act way younger than you really are.”

Allright, who’s going to take the lead and get a Central team up and ready for Warrior Dash 2013? Adam? Olen? Borger? Who’s going to put this thing together?