Three observations from a jam-packed Lord’s Day in Midland, Texas. 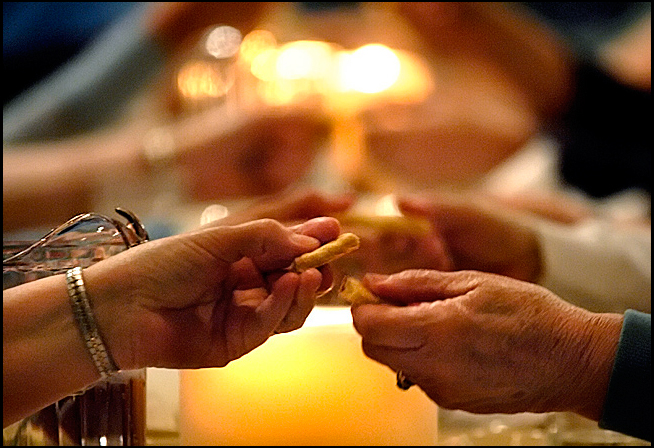 We are attempting to move our communion time at GCR in a direction that makes the Lord’s Meal more communal and less individualistic, more participatory and less observance, more sharing and less partaking. While the trays for the bread were being passed yesterday, we asked our church family to talk with one another in their seats about their favorite parts of the Christmas season. That seemed innocent enough. Non-threatening. Then when we passed the trays with the cups, we asked everyone to tie their favorite parts of Christmas to Jesus. How do those favorite things connect to Christ? How do those favorite things remind us of Jesus or honor Jesus or point to Jesus? That seemed a little more difficult.

Our youngest daughter, Carley, mentioned right out of the gate that her favorite parts of Christmas are family and food. When it came to connecting those things to Christ, I offered that Jesus came here to bring all people into his family, to create a holy family connected to one another in him. As for food? Carley didn’t hesitate to say, “The feast. Eating and drinking with Jesus as his table. Jesus ate with everybody. And so do we.”

Oh, that made my heart feel so good.

It was good to overhear Eddie and Carol having a similar conversation with their grandchildren in the pew behind us. It was encouraging to watch these conversations taking place all over the worship center. We’re trying to make the Lord’s Supper more of a true communion at GCR. Connecting our everyday lives and events – and the seasonal events, too – to Christ is another way to obey the command to eat and drink together in remembrance of him. And it’s more communal. 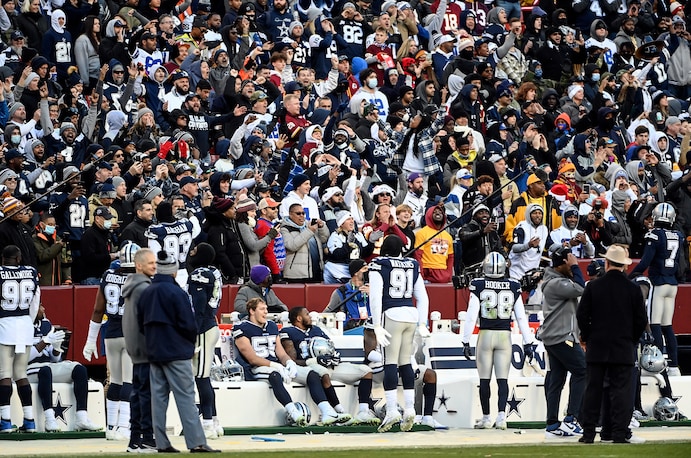 After yesterday’s win over WFT, the Cowboys have a three-game lead in the NFL’s worst division with four to play – a playoff berth is now a done deal. But how good do you feel about it?

Elliot ran for a grand total of 45 yards. The Cowboys offense only scored one touchdown, and that was a 41-yard drive after a turnover. Four Dallas drives ended with super short field goals of 35, 28, 37, and 29 yards. We call that playing between the 20s, bogging down in scoring territory.

This was against a six-win WFT that was completely decimated on both sides of the ball with injuries. This was after shipping their own sideline benches to FedEx Field to make sure the heated seats worked. This was after Mike McCarthy made a weird “guarantee” of victory to the media.

The Cowboys are going to win the NFC East and host a Wild Card playoff game. But does it matter? The way the team is playing right now, the way they’ve been playing for the past seven weeks, they can’t beat Arizona, Green Bay, Tampa Bay, or the Rams. They’re not even in that same universe. I guarantee it. 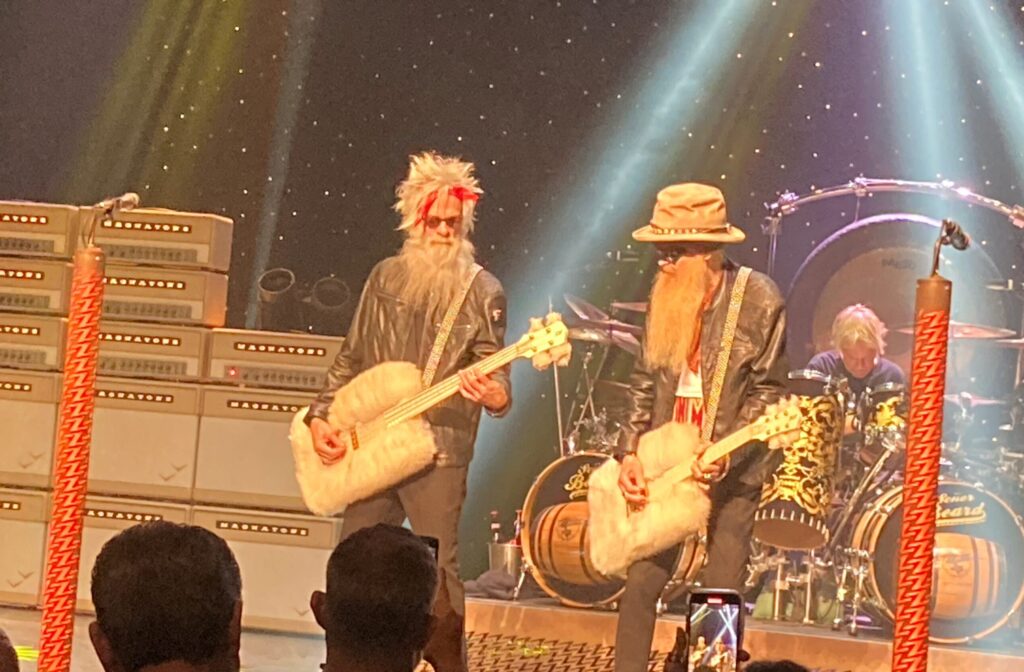 Last night, my new friend Gary and I took in 66.667% of ZZ Top at the Wagner-Noel here in Midland. Obviously, it’s not the same without Dusty Hill – we knew that going in. But, good night, it’s still pretty stinkin’ good.

We had great seats at this tiny, intimate venue – it only seats 1,800 – sixth row dead center. Longtime ZZ Top guitar tech Elwood Francis played bass and attempted some vocals and mostly stayed in the background while drummer Frank Beard and ZZ Top founder and front man Billy Gibbons did the heavy lifting. And, for all intents and purposes, it was a standard ZZ Top concert, very much like the seven or eight I’ve attended before.

They played all the hits, everything you would expect from a ZZ Top show, except maybe “Cheap Sunglasses.” They ran through everything from “Waitin’ for the Bus” and “La Grange” to “Gimme All Your Lovin'” and “Sharp Dressed Man” and all points in between. They went deep, way deep, with a B side from their very first album called “Brown Sugar.” They brought out the fuzzy guitars for “Legs.” They changed the words in “Head’s in Mississippi” and “Jesus Just Left Chicago” to reflect our locale in Midland. They covered “Sixteen Tons.” They engaged in their signature choreography, minor steps and subtle hand motions that Gibbons describes as “low energy, high impact.” They played for an hour-and-a-half with nothing but a three-minute break in the middle. In other words, they delivered.

And by “they,” I mean Billy Gibbons. 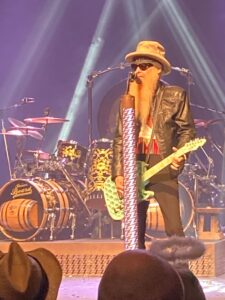 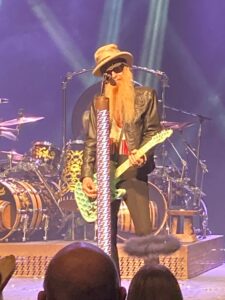 The Reverend Billy G is more than capable of carrying a show by himself. He is an icon of Texas music, a rock and roll ambassador for the Republic for more than 52 years. He’s a legendary Hall of Fame songwriter and guitar player. He plays a blistering electric guitar with incredible precision and dramatic flair. He has such fun doing it that everyone watching can’t help but have fun, too. He’s both traditionally conservative and wildly innovative at the same time. He puts on an amazing show. Every time.

But it’s not ZZ Top without Dusty Hill. 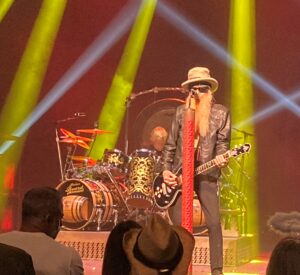 Gibbons paid appropriate tribute to Dusty at the beginning of the concert and he modified the lyrics to “Jesus Just Left Chicago” to include his partner’s name. But, man, it felt different. Dusty’s harmonies were gone. Elwood attempted to blend his voice with Gibbons’ during the songs from the Eliminator album and it was okay. But during most of the show, it was solo Gibbons. Which is fine. But it’s not ZZ Top. Hill’s harmonizing gave the group its depth. And Hill’s antics gave the group its energy. While Gibbons sings with a low gravely bass, Hill always sang with an excitable energy that was contagious. Much higher pitch. Almost frantic. I’ve always imagined it was Dusty who came up with their choreographed dance moves – it just seems like something he would do. ZZ Top has always been a two-man show, Dusty and Billy playing off each other, making each other better, singing together, laughing at each other, in perfect lockstep literally and figuratively for 52 years. Last night was a Billy Gibbons show with a backup band. Again, it wasn’t bad. In fact, it was really, really great. But it’s not ZZ Top.

I wondered how they were going to sing “Tush” without Dusty. It’s a signature ZZ Top song, one of their all-time biggest hits, and a concert staple. But it’s also one of the few on which Dusty sang the lead. How were they going to do this? Would they even try?

Turns out, the last song of the encore, the final number of the night, was a recording of Dusty’s voice as he sang “Tush” at his last ever concert last spring. They’ve singled out the vocals so they can play it alone, so Dusty can sing his favorite song with Billy’s guitar and Frank Beard’s drums. So we could all sing with Dusty Hill again just like we have for five decades.