“We know that the whole creation has been groaning as in the pains of childbirth right up to the present time. Not only so, but we ourselves who have the firstfruits of the Spirit, groan inwardly as we wait eagerly for our adoption as children, the redemption of our bodies.” ~Romans 8:22-23 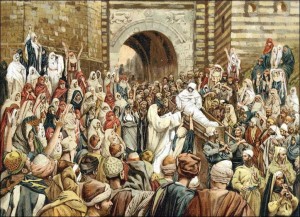 Scripture gives us many metaphors for what God is up to in this world. One of the most prominent word pictures or set of images is the motif of changing places. Switching roles. The rich and powerful being brought down and the poor and weak being lifted up. God is turning things upside down. It’s Freaky Friday to the max. Actually, it’s more like Eddie Murphy and Dan Aykroyd in Trading Places, only without the one dollar bet and gorilla costume. 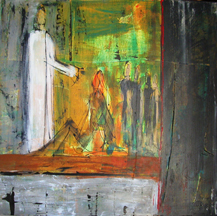 The psalmist groans. He can feel it. Sense it. Anticipate it. It’s going to happen.

“He raises the poor from the dust and lifts the needy from the ash heap; he seats them with princes, with the princes of their people. He settles the barren woman in her home as a happy mother of children. Praise the Lord!” ~Psalm 113:7-9

“The bows of the warriors are broken, but those who stumbled are armed with strength.
Those who were full hire themselves out for food, but those who were hungry hunger no more.
She who was barren has borne seven children, but she who has had many sons pines away.
The Lord brings death and makes alive; he brings down to the grave and raises up.
The Lord sends poverty and wealth; he humbles and he exalts.
He raises the poor from the dust and lifts the needy from the ash heap; he seats them with princes.” ~1 Samuel 2:4-8

Hannah can feel it. She knows it. She’s waiting for it. She groans.

Mary the mother of Jesus knows what the coming of the Christ means and she expresses it in praise to our God.

“He has brought down rulers from their thrones but has lifted up the humble. He has filled the hungry with good things but has sent the rich away empty.” ~Luke 1:52-53

Then Jesus comes! Yes, finally, the Holy One of Israel comes! And what does he preach?

This is Act Four of the Story of God. The Creator comes to us in the Messiah Lord. Emmanuel. God with us. Jesus comes to us to reverse the curse. Jesus is all about turning things upside down.

He heals the Centurion’s servant. He brings the widow’s dead son back to life. He drives out demons and heals the sick. And he doesn’t just heal the physical things. When Jesus heals, he fixes everything: physical, spiritual, emotional, relational. God works through Christ to totally restore. Peace. Shalom. Wholeness. Completeness.

The woman caught in adultery. Jesus gets involved and she moves from her day of public execution to a brand new life without sin. Lazarus is dead, he’s been dead for four days. His sisters are groaning, all of Bethany is groaning and grieving. And Jesus says this is not how things are supposed to be. And he reverses the curse.

Jesus is dying on the cross. He’s suffering and suffocating. He’s moments away from dying. And I imagine he lifts his head up and prays to his Father:  “Dear Father, please let me do it one more time. Let me fix one more thing. Let me turn one more person’s life upside down.”

And the criminal being hung on Jesus’ right turns to him. And he groans. “Jesus, remember me.” And Jesus says, “Done. You’re with me.”

“I consider that our present sufferings are not worth comparing with the glory that will be revealed in us.” ~Romans 8:18

God is giving glory to his people and to his entire creation. God is working right now to transform his people into the perfect image of the Christ. That’s the climax. That’s where we’re headed. Us and all of creation.

The groanings in the world, the groanings in your own life, I’d say, are actually proof that the God who began a good work in you, in us, is indeed bringing it to completion.