In the first century, Israel was ruled by Rome. The Roman Empire reigned supreme. There were Roman garrisons in every city; there were Roman soldiers on every street. The Jews were allowed their religious laws and festivals, but all under tight Roman restrictions. Upstart priests were arrested; rebels were mercilessly crushed. And groups of God’s people who were known as Zealots began to lash out in anger and violence.

As Roman rule became more oppressive the Zealots stashed their hillside hideouts with swords and spears and daggers. There were secret killings, public assassinations, and bloody revolts. The Zealots were committed to a life of violence against the Roman government. They challenged the presence of Roman soldiers; they provoked the Roman armies. And by July of 67 A.D., the violence escalated to the point that 40,000 Galileans were massacred in the hills outside Nazareth.

As the land we live in today becomes less Christian — or as the Church becomes more Christian — I believe it’s absolutely realistic for us disciples to be labeled and/or targeted by the government. As time goes on in this country, I think it’s feasible that Christians could come to be associated with dangerous radicals, to be blacklisted, to come under closer government scrutiny, to lose our tax-exempt status, maybe even to be arrested.

So, how do Christians respond?

As the realization sets in that we do not live in a Christian nation, I’m afraid that we Christians are guilty of lashing out in anger and violence. We’re more like the Zealots than we ought to be.

Lengthy petitions. Angry letters to the editor. Hate filled emails that are forwarded and re-forwarded and forwarded again. Malicious videos. Spiteful attitudes. And we fight and we rally and we march. And we target a certain political party and we classify a particular political ideology as evil. And we blast away. Both barrels.

When the government put the screws to God’s people in the first century, the Zealots responded by killing with their swords.

When the government clamps down on God’s people today, I’m afraid we respond by killing with our words.

In the early days of God’s Church, Peter and John were arrested for preaching and teaching the resurrection of Jesus. They were questioned by the authorities and then ordered to stop speaking in the name of Jesus.

Upon their release, Peter hurried home to Capernaum where he immediately wrote a scathing letter to the Sanhedrin in which he referred to Caiaphas as a flaming liberal and questioned his citizenship and his sexuality and made copies of the letter for all the apostles.

Peter drew the dagger from his belt, the one he had used in the garden the night Jesus was betrayed and, shouting “Jesus is Lord!” he ran it through Caiaphas, killing him, while John plotted the destruction of the evidence.

“On their release, Peter and John went back to their own people and reported all that the chief priests and elders had said to them. When they heard this, they raised their voices together in prayer to God.” ~Acts 4:23-24 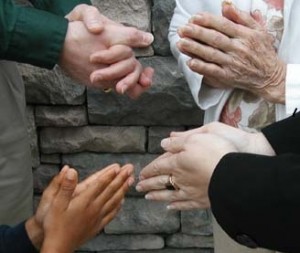 May we be a people who never ever lash out against those who oppress us. May we never attempt to injure anyone with swords or with words. And when resistance to the Kingdom and opposition to our Christ gets worse in this land, may we find our strength and our comfort with each other. May we respond to political crisis and government hostility in united, fiery, passionate, intense prayer to our Father. May we be bold to continue preaching and teaching in the name of Christ Jesus, our King. And may our God act in mighty ways to further his Word and advance his eternal Kingdom.