The Peace of God 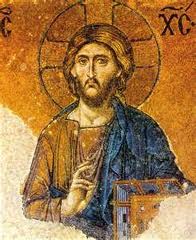 “The peace of God, which transcends all understanding, will guard your hearts and your minds in Christ Jesus.” ~Philippians 4:7

Shalom. Peace. It’s the perfect state of harmony and communion between God and man, between men and women, throughout all creation. It was promised to the patriarchs. The psalmists wrote about it. The prophets foretold the deliverance of this ultimate peace in the Messiah. For centuries, every generation of God’s people longed for that peace. They sang about it. They preached about it. They looked for it. They waited for it.

That peace of God, that perfect shalom, has come to God’s people in Christ Jesus!

Now that Jesus has won the great victory at the cross, now that he’s defeated death and sin and Satan, now that he’s been raised and exalted by the Father, now that he reigns in all glory and power from his heavenly throne, we possess the peace of God.

Paul says Jesus himself is our peace. He tells the Ephesians that Christ has destroyed the barriers, he’s abolished the wall of hostility. Jesus has forever eliminated the things that separated men and women from God, the things that divided us against each other. All those things are nailed to the cross! Dead! Gone! Obliterated!

“He came and preached peace to you who were far away and peace to those who were near. For through him we both have access to the Father by one Spirit.” ~Ephesians 2:17-18

May we dwell in the joy of the Lord. And may the peace of Christ rule in our hearts.

The high school football season begins tonight with our Amarillo Sandies hosting Palo Duro at Bivins Stadium. And, as always, the Stanglins are all in. As is our tradition around here, we attended the pep rally this morning to cheer the team, to celebrate with the Seniors (including Valerie), to boo the Freshmen (including Carley), to be proud of Blakelee (cheerleader) and Boyd (drum line), and to welcome the new season with the rest of our community. We’ll tailgate tonight with our normal crew and live and die with every snap of another Sandies campaign.

It feels a little bit strange kicking off the season on a Thursday night instead of a Friday. Going to work and school again tomorrow after a late night football game isn’t anybody’s idea of fun. But this is what happens when you share a football stadium with the other high schools in town. And I’m still not totally sure about this new 6A classification. It doesn’t sound right.

But at 7:30 this evening under a blue-gray cloudy sky in Amarillo, the drum line will march, the cheerleaders will yell, the coaches will inspire, the referees will blow their whistles, and the Sandies will launch their 116th football season. And all will be right in the world.