The Leader as a Little Child

While preparing for our upcoming elders/ministers retreat, I’ve read and re-read several parts of Leading the Congregation by Norman Shawchuck and Roger Heuser. I’m particularly interested in chapter two: The Interior Attitudes of the Leader. I’d like to take the next few days exploring their ideas and reflecting out loud here on what it means for me, personally, and for our churches. 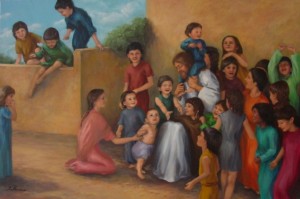 Shawchuck and Heuser claim the first and foremost quality of religious or church leadership is childlikeness. The disciples were sincere when they asked their Lord who would be the greatest when the Kingdom was finally realized. Their teaching and learning had, for generations, conditioned them to expect a hierarchy within this new Kingdom structure. The hearts of these disciples were filled with ambition; they wanted a Kingdom that would bring them privilege and honor.

In actuality, Jesus came to usher in an eternal Kingdom in which there is no hierarchy and no superiority. No chain of command, no flow chart, no levels of authority or power. And I’ve got to think this not only surprised the apostles, it probably disappointed them, too. They asked Jesus all the time about their particular ranking in the system. “Who’s the greatest? Who’s going to be in charge?” They couldn’t stop talking about it even during the meal that last night in the upper room. It was there that Jesus proclaimed “You are not to be like that! Instead, the greatest among you should be like the youngest, and the one who rules like the one who serves… I am among you as one who serves” (Luke 22:25-28)

They asked the same question over and over again. And every single time Jesus gave them the same answer: The greatest will be as the youngest, and the leader as a servant.

Shawchuck and Heuser say that childlikeness as the model for church leadership should be received as good news, not bad news. It simply means leading the congregation with an attitude similar to a child’s: “…one who opens the self to this reality as a gift, and one who lives and ministers as the least in service to all. This is childlike spirituality and authentic leadership within the Kingdom.”

Just like the aspiring disciples, I sometimes take myself way too seriously. Honestly, I have a real tendency to be devastated by the slightest criticism. I worry if people aren’t taking me as seriously as I think they should. Are they listening to me? Are they taking my suggestions and advice? Are they paying attention to me? Do they like me? Am I important here? That’s insecurity, I guess. It’s definitely not humility or Christlikeness. It exposes a preoccupation with myself and my own status over the needs of the ones to whom God calls me to minister. It’s silly and shallow. Rather immature.

Just the opposite of the childlikeness Christ envisions for his church leaders.

Children take their play seriously, but not themselves. They are transparent without shame. God wants us all to be like youngsters.

Michael Quoist, in his book Prayers for Life, speaks for God on this subject:

I don’t like old people unless they are still children.
I want only children in my Kingdom.
Youngsters — twisted, humped, wrinkled, white-bearded — all kinds of youngsters, but youngsters.
I like children because my likeness has not yet been dulled in them.
They have not botched my likeness.
I like them because they are still growing, they are still improving.
They are on the road, they are on their way.
But with grown-ups there is nothing to expect anymore.
They will no longer grow, no longer improve.
They have come to a full stop.
It is disastrous — grown-ups think they have arrived.

Jesus calls us as church leaders to childlikeness so we will learn to let God carry us as we lead; to let God teach us what we need to learn. All our skills and talents and abilities, all our plans and visions and dreams, none of it really matters. The plan is in our Father’s hand. And we (I) need to run to him like a little child; seeking his love and approval; living to please him not others; giving to serve others, never myself.