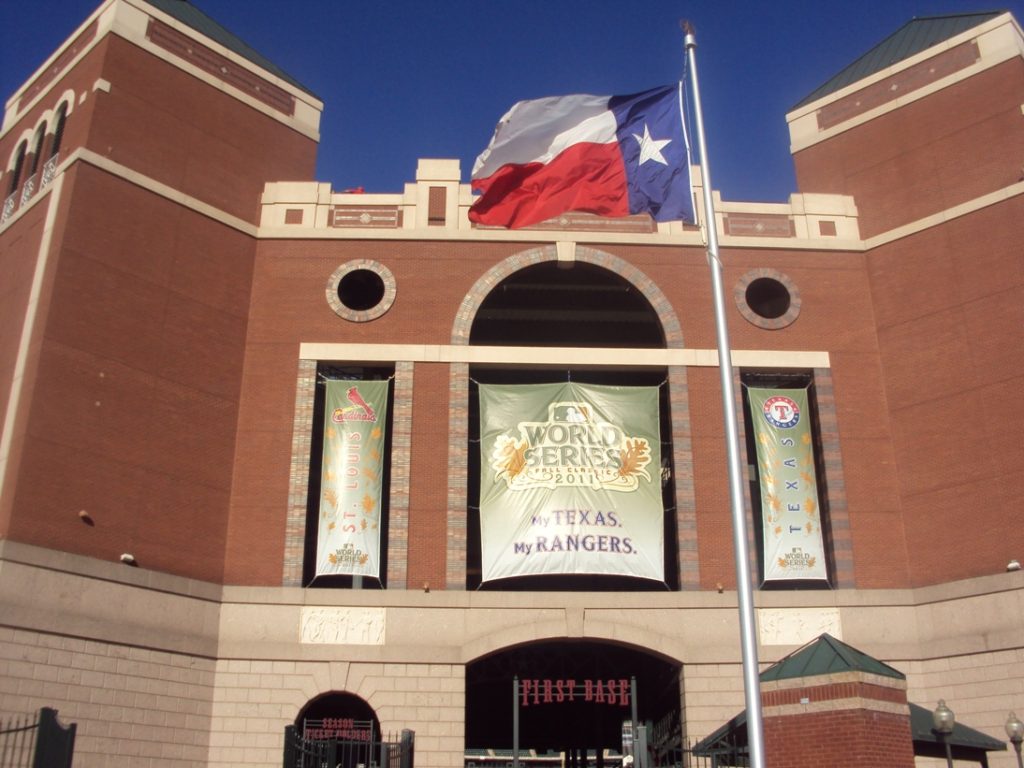 Baseball is an outdoor game. It’s designed to be an outdoor game. Like with football, the weather at a baseball game is part of the deal. It’s built in. But the Texas Rangers, who play in one of the top five nicest ballparks in all of baseball, are moving into a one-billion-dollar monstrosity of an air-conditioned anathema next year. The last chance to see an outdoor Major League Baseball game in the state of Texas is this weekend, and I’m taking it.

The Ballpark in Arlington. I used to live there, you know? 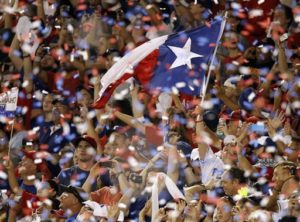 That’s where Johnny Oates blew up at me for missing the media elevator and showing up late for a post-game press conference in that first season, only to pull me into his office and apologize to me the next afternoon. That’s where I earned my baseball degree sitting next to the great Steve Busby in our KRLD front row seats in the press box over a thousand summer nights. That press box is where I had several unplanned conversations with George W. Bush who would just pop in unannounced two or three times a season. I had my own parking space there. I ate for the cycle there. Many times. I broadcasted live from a soundproof booth in the TGIFriday’s in centerfield every Friday afternoon for four years.

There’s no way to know how many times I interviewed Michael Young in the Rangers clubhouse. After a loss, he was just about the only player who would talk. And there were many losses. It’s in that clubhouse where I was looking for players one afternoon to comment on the release of Juan Gonzales. It had just happened and I ran downstairs to get some sound for our late afternoon sportscasts. Kevin Mench declined. Rafael Palmeiro turned to Mench and said, “You gotta  talk to him. Because when it happens to you, you want these guys to be nice to you.” So Raffy and Mench talked to me that day.

That clubhouse is where I conducted an afternoon interview with Alex Rodriguez for a friend of mine, Bob Matuszak, who was freelancing for a health and fitness magazine. I had set it up with Rodriguez the day before — he knew what he had agreed to do. But he hated answering questions about his exercise habits and his diet routine almost as much as I hated asking them. After about two minutes he just up and walked away from me. I said, “Alex, give me another five minutes.” I needed to get these questions answered so I could get my twenty-five bucks. But he just put his hand up and walked away. And I hollered, “Thanks a lot, A-ROD!” He hated being called A-Rod. Bob kept that cassette tape for years. You could hear me yelling angrily and sarcastically at the highest paid player in baseball. He laughed about it all the time. 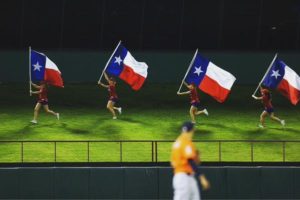 Eleven straight Opening Days. One private meeting with Buck Showalter. Tim Carpenter hitting his head on the decorative metal around the stage when the Rangers introduced him to the press as the club closer.  I was one of the voters for the Rangers Hall of Fame inaugural class. It’s not that hard putting check marks next to Nolan Ryan and Jim Sundberg. Lance Nix’s leopard thong. John Wetteland pouring champagne down the back of my shirt when they clinched in ’99.

There were a couple of springs when the Big 12 played their conference tournament at the Ballpark. On those Thursday and Friday afternoons, I’d walk out of our studios to the picnic tables in centerfield and spend the 30-minutes between sportscasts taking in the sunshine and the action. I worked closely with Scott Franzke, Chris Schneider, and the late great Roger Emrich at that Ballpark. I sat in the main studio with Mike Rogers and Alice Rios talking about new Cowboys coaches and Mavericks draft picks. Tyler Cox hired me there and Jerry Bobo tried to get me to stay there.

The very first playoff game in Rangers history was at that Ballpark. I was there covering the second playoff game in Rangers history. The next night. In the auxiliary press box. I was delighted to see my assigned seat was next to the legendary Norm Hitzges. I was disappointed that he never showed. I was in the home run porch for the last World Series game ever played in the Ballpark, a thrilling Game Five win over the Cards. And I’ll be there tomorrow when they begin their last ever series in the “Temple” against the hated Yankees. 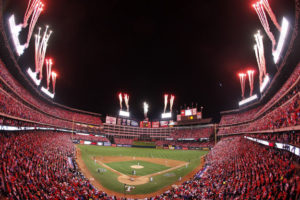 It’s going to be hot tomorrow night. It’s always hot at Rangers games. That’s part of the deal. And I’m thinking this will be the last one. When they move into that Jerry-inspired sportatorium next year, they’ll never have the roof open. The Astros only open their roof between 10-12 times per season. When do the Cowboys open theirs? I’ve read that the Rangers will close the roof when the temperature or the temperature-heat-index is over 84-degrees or when the wind is forecast to be more than 20-miles-per-hour. So, that’s like, always.

It won’t be like going to a baseball game. It’ll be like something else. And there won’t be any memories. Just sterile, indoor, air-conditioned entertainment.

The Ballpark in Arlington is only 26-years-old and it’s still one of the top five nicest in the country. Yes, it’s hot. But do you think a Lemon Chill is going to be nearly as good next year?