The "Demonization" of the "Other Side" 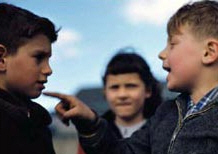 I was flipping through the TV channels a couple of weeks ago and accidentally landed on a news station. I stayed. Shame on me. This particular network was airing a 30-minute program about one U.S. political party that was claiming the other political party’s ideas and agendas were like Hitler’s. The anchors and reporters were refuting those claims by attempting to prove how, in fact, the first party’s thoughts and plans were actually more like those of Hitler.

The “demonization” of the other side is a disease that’s taking over the entire world.

I don’t have to actually talk to you because I know we disagree about this one thing. I’ve already labeled you as bad. You have this one certain viewpoint so I already know exactly where you and exactly where you’re going. Why would I spend any time or effort to get to know you?

Talk radio and talk TV are increasingly about this attitude now. Every other channel or station, every other show host and program, yelling and arguing, demonizing and vilifying the other side. It’s not just accepted as standard behavior or the expected response, it’s being promoted as virtuous!

You’re not involved in any of that, are you?

May we be a people who receive one another as Christ receives us, who forgive others as we’ve been forgiven by God, and who love God and others as fearlessly and unconditionally as he loves us.