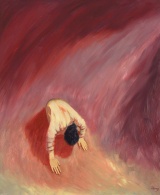 Jesus says, “I am the Way.” I am the Way to God and I’m also the way God comes to you. I’m a two-way Way. And so we choose Jesus. And when we choose Jesus, what is it specifically that we’ve chosen? What are we signing up for when we say “Yes” to Jesus?

Well, the Gospels tell us plainly that Jesus’ Way is counter cultural. Popularity and power mean just about everything in our society, but popularity and power mean absolutely nothing to our Lord. In the Gospels, it looks like Herod has the power. The governing officials in the Roman Empire have all the power. So the Roman soldiers. The religious leaders have a lot of power. The chief priests and teachers of the Law and the Sanhedrin wield plenty of power. And all of these people and groups seem to have their way with Jesus. Jesus is the lowly servant who’s despised and rejected, beaten and crucified. Cursed by God and man.

But remember the centurion clearly sees the truth when he sees how Jesus dies: “Surely this man was the Son of God.”

Jesus’ way is upside down. It’s counter cultural. Our default, though, is the pursue the ways of the world. As disciples of Jesus individually and as churches of God collectively, we’re not very careful with this. Without even thinking about it, we embrace and adopt the ways of the culture. We imitate the ways used by powerful people who run large companies and corporations, high profile people who lead political parties and nations. By threat and force and power; with money and might; by out-yelling and out-insulting others; by demonizing those who disagree with us; by walling ourselves off from anyone who may do us harm. And we don’t even consider that those ways are totally at odds with the way of Jesus.

We see accomplished men who’ve achieved great success by using these worldly methods and we make them elders of the church. We make these guys preachers of the Word. Whatever the culture decides is exciting and successful and influential, whatever gets things done, whatever will gather a crowd.

We usually have to take four or five different looks at guys whose main character traits are gentleness and humility before we consider them for leadership roles — if we even look at those kinds of guys at all. Shouldn’t the man who lives only to serve others be moved to the top of the list? Shouldn’t the guys who consider the needs of others more important than their own, the guys who refuse to advance their own agenda, the guys who you’ve never heard say one bad thing about anybody else, shouldn’t they be the frontrunners for leadership positions in our congregations? Shouldn’t they be the ones to set the tone in our churches?