What a marvelous gathering Thursday night at Polk Street Methodist as about a hundred of us from all four of the downtown churches combined and packed our school supplies for delivery this week to our four downtown area elementary schools. It was the first official project in our “4 Amarillo” efforts. And, by any measure, it was a tremendous success.

I’m very, very proud of my Central church family for their enthusiastic embrace of this initiative. I’m so grateful for the leadership in our church family that has fostered a culture in which this kind of Christian unity can be explored and expressed. And I feel so blessed by our God to be right in the middle of something that is an answer to the prayers of Christ Jesus. Our Lord asked God to make all his future followers one body, united in spirit and truth, so that the world may believe. And we are taking that request seriously, jumping in with everything we’ve got to put aside our differences for the sake of the city.

We delivered our school supplies and catered a breakfast for all the teachers at Bivins Elementary yesterday. The other three churches are delivering their supplies today. The Amarillo Globe-News ran not one, but two, front page stories, above the fold about our ecumenical efforts. And everywhere I’ve gone this week, it seems that a lot of people in our city are talking about what’s going on with the downtown churches. You can click here to read the AGN story about the night we packed the school supplies. Click here to see a short video the newspaper put together with us four downtown pastors that night. And click here to read the other AGN story about how “4 Amarillo” began. I love the line Howie Batson, the long-time pastor at First Baptist, used to describe our dreams as four churches from different denominations coming together to serve others. He said this school supply drive is just the appetizer, it’s not the main course. 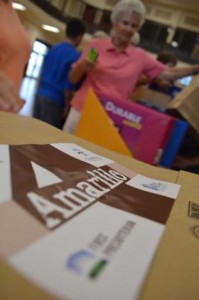 I’m still fairly floored by the response of our own Central Church of Christ family. Even today, I’m still hearing third and fourth hand from folks who are still talking about that John 17 sermon of a couple of weeks ago. I’m still hearing stories this week from those who’ve heard other people talking about that lesson on Christian unity. The emails and texts are still trickling in, even this morning, about that sermon, about that day, when we proclaimed together that the matchless grace of God trumps and covers all of our denominational differences.

I’m still processing a lot of it. I’m still in conversation with others about why that one lesson, why that one day, impacted so many of our people in such profound ways. I had my theories even as soon as lunch at Ruby Tequila’s that afternoon. And they haven’t changed much since then.

I believe that so many of our people have felt for a long time that our exclusive stance and sectarian practices were wrong. It’s been very difficult for most of us to believe that Churches of Christ are the only true church and that we alone have the entire truth of God’s Word and will for his people. It never made sense to most of us. It just didn’t add up. So a lot of us have been practicing unity with other believers, even though we never used the word “ecumenical” and didn’t even realize we were doing anything revolutionary. Most of us have studied the Bible in groups with Christians from other streams. Most of us have worshiped at funerals and weddings with Christians from other denominations. We’ve joined hands in service projects, we’ve raised hands at Christian concerts, and we’ve clasped hands in prayer at hospitals. Getting along with other Christians, putting aside our differences in some beliefs and practices in order to worship and serve together isn’t new for most of us. A lot of us have been doing things like this for years.

But two Sundays ago, it was the very first time that any of our church family had ever heard it publicly stated in an official worship assembly by the official preacher, commissioned by the official church elders, as an official church policy that we would pursue such unity among all Christian disciples in our city. I think it validated what most of our church practices outside our worship gatherings. I think it sanctioned what they were already doing. I think it liberated everyone to continue to explore and express Christian unity in their own ways. And I believe it addressed and removed the stigma we still bear in many circles that we believe we’re the only ones who are right. There was an almost audible congregational sigh of relief during and after that sermon that is still being expressed today. Not only is it OK to fellowship and worship and serve with other Christians outside the Churches of Christ, it’s expected by our Lord and it’s actually a great tool for evangelism. Not only is it OK, for many reasons it’s preferred!

More than that, even, I believe the overwhelmingly positive response is because we gave our church a clear argument for Christian unity that maybe they’ve never heard. I believe our people have always known that fellowshipping other Christians was OK, they just never really knew how to articulate the reasons. They didn’t know how to answer the staunch separatists among us who criticize any kind of ecumenical programs or gatherings. The argument on grace that I presented that day and posted here  in this space last week is air tight. In my view, it’s indisputable. How in the world can God’s grace cover me and us in our imperfections and not cover other Christians? How can an honest man or woman do or believe any more than they know? We must admit that we don’t have everything perfectly figured out and that God’s grace covers our misinterpretations, our misunderstandings, our honest but misguided beliefs and practices, and even the things we’ve innocently but royally messed up in massive ways. Doesn’t the same matchless grace we sing about cover all Christians of every stripe of the same shortcomings? If we believe God’s grace is only for us because we’re trying harder or because we’re more sincere, then we are guilty of a shameful arrogance and pride.

I’m not sure too many of our folks have ever heard it in those specific terms or have thought about it in that particular way. And they were liberated! They were freed to recognize all followers of Jesus as brothers and sisters, united by the blood of our common Savior! They’ve been given an inarguable response to the critics. They’ve been equipped with an apologetic to the way they’ve always felt in their hearts. And they can’t stop talking about it.

Before this week is over, I’ll share a couple of the emails and texts I’ve received about this, process this whole thing a little bit more, and then move on. There are other things to write about here and I’ve spent maybe too much time on this. One more post, maybe Friday.

In the meantime, keep praying about “4 Amarillo.” Keep praying for the hearts of our city and for the Christian ministries of God’s people here. And keep asking God to use our attempts at unity for his eternal glory and praise.