In 1 Samuel 24, in the cave at En Gedi, David’s men see King Saul, their ruthless enemy, in a humiliating and vulnerable position. Most translations say Saul went in to relieve himself. The New King James Version says Saul went into the cave to “attend to his needs.” Whatever the terminology, Saul is completely helpless. He’s right in front of them. And he thinks he’s all alone. David’s men see their enemy. And they’re ready to kill him.

By contrast, David sees the magnificent — flawed, yes — and wonderful king anointed by God. He sees the Lord’s chosen ruler. And he didn’t kill him. He submitted to him. David turns this crude scene in this dark cave in the wilderness into an act of homage to his Lord. He made it a sacred moment.

David’s motivation has nothing to do with his own pride or safety or reputation. David is motivated purely by a genuine devotion to his God, his Rock. The idea of taking Saul’s life is unthinkable. Not because of Saul. But because of God.

I see the flawed, anointed one of God in his Church. I see it in church leaders. Flawed, but anointed by God, standing for God, representing God. And our treatment of the Church and church leaders ought to reflect that understanding.

All of us brothers and sisters in Christ are anointed by God in the waters of baptism. We’re together standing for God, representing God, working with God. And our honorable treatment of one another ought to reflect that understanding. 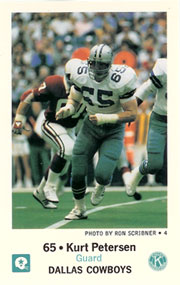 65 days until the Cowboys begin their 2009 football season. And the second-best player to ever wear #65 in Cowboys history is offensive lineman Kurt Petersen. As a 4th round draft pick out of Missouri, Petersen was a six-year starter at right guard, blocking for Danny White and Tony Dorsett from 1980-85. He helped lead Dallas to three straight NFC Championship Games, all losses.