Take Courage! It is I!

I’m teaching some of the broad themes of the Gospel of Mark in our Wednesday night class. You can find our outlines and articles and, eventually, the audio from the classes by jumping to the Central Church of Christ website here. Tonight we’re focusing on the great contrast between fear and faith.

(It’s appropriate to be considering this together on the same night the Rangers open the World Series. Rangers fans know all too well the mighty struggle between fear and faith, between despair and belief.) 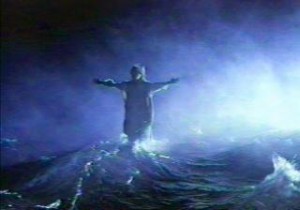 Everybody in Mark is afraid. Everybody. Jesus calms the storm, delivers his apostles from the sea, and he turns to them and asks, “Why are you so afraid?” Jesus delivers the demon-possessed man from the devils that have enslaved him and the townspeople react in fear. The bleeding woman trembles in fear. Jesus tells Jairus not to be afraid. The apostles are terrified when Jesus walks on the water. They’re afraid to ask the Lord what he means when he predicts his death. Those following Jesus “on the way” are said to be afraid. The religious leaders in Mark are afraid: they fear Jesus, they fear the people, and they’re afraid of the crowds.

Everybody’s afraid in Mark. They’re terrified by Jesus’ power over nature, by his power over hell; they’re frightened by the images of persecution and suffering and death he predicts; they’re scared by what it means to follow him. And Mark does not want us to miss this. In fact, this fear factor as a theme is so important to Mark it’s the very last thought, the last word literally, in his Gospel. In Chapter 16 the angel at the empty tomb commands the women, “Go, tell his disciples and Peter.” But “they were afraid.”

If fear is the opposite of faith — and I’m convinced it is — fear paralyzes us while faith liberates us. Fear looks at me and the world while faith sees me and God. And Jesus longs for us to have faith. His desire is to drive away our fears. So he comes to us. He reveals himself to us. He shows us who he is and what he’s all about. 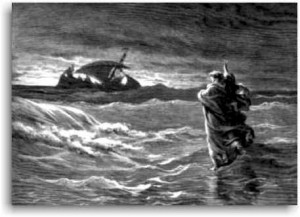 He comes to us, walking on the uncertain waters of the storms all around us. He comes as the One who is sovereign over those waters that threaten to do us in. He controls them. He does what only God, the divine Creator of heaven and earth can do. He walks on the water to us and says, “Take Courage! It is I! Don’t be afraid.”

To all the people in Mark who are afraid, the message from our Lord is the same: Don’t be. He tells the disciples to have faith. He informs the woman that her faith has healed her. He tells Jairus to believe. He teaches them (us) in patience and love. He leads them (us) by his perfect example. And he rescues them (us) and delivers them (us) again and again and again. 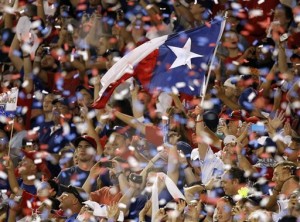 I feel a million miles away from my Rangers. Saturday’s pennant clincher was thrilling, but there was no mad late-night dash to Academy to celebrate with the throngs and purchase the official T-shirt like last year. I had called the Academy Saturday afternoon just to see if they might, by some chance, have the shirts stashed away in boxes, ready to be unveiled and made available as soon as Feliz recorded the last out. Alas, the poor young man on the other end of the line had no idea what I was talking about.

The shirts just made it to Academy up here yesterday. Whitney and I quietly and anticlimactically got our shirts after school. We’re wearing them today. But I haven’t seen them on anybody else.

The Amarillo Globe-News only had two stories about the Rangers in their whole newspaper today: an AP wire story about C. J.’s freeze chamber (boring) and a local column about long-suffering Rangers fans (already lived it).

For big regular season games and every single postseason game, I have my text conversations with my die-hard Rangers friends. From Fort Worth and Amarillo to Arkansas and East Texas, we watch the games “together” and make “interesting comments” (as George Costanza says) and wise cracks about team strategy, booth announcing, and critical plays. Not tonight, though. It’s a church night. It’s also an elders meeting night. And I’ve left my DVR in North Richland Hills. If I’m lucky, I’ll get home in time to catch the last inning or two.

Hopefully, Chris Carpenter will be long gone by then. And Alexi will be dealing with a lead.