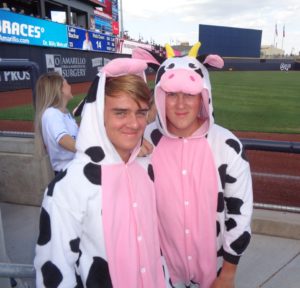 My brother Keith and his family came through Amarillo last night on their way home to Austin from a vacation in Yellowstone and we took them to their first Sod Poodles game at our new downtown ballpark. We had planned to introduce them to all the really great things about Sod Poodles games: free parking on Fillmore Street, Texas Tea, Dickie’s Frito Pie, six-dollar nachos, wondering why Ruckus wears a belt but no pants, cheering the local players by their first names, loving the evening weather in Amarillo, running into more than three-dozen people from church, explaining “HodgeVision,” expecting at least two or three homeruns, singing that awful song during the seventh-inning stretch, and throwing tennis balls at the target in left field.

What we didn’t expect was for my two nephews to be selected to provide the in-between entertainment during the second inning. Almost as soon as we found our seats (not our seats; Dale Cooper’s awesome seats), Paul and Isaac were asked to participate in the on-field Caviness Beef promotion. And before the young lady in the “Sod Squad” jersey could explain the details, they were both signing the waiver forms.

Paul and Isaac had to put on cow costumes that serve to remind the crowd more about Chick-fil-A than Caviness Beef, put on blindfolds, submit to being spun around about seven hundred times, and then find the staffer standing in left field ringing a cow bell. The winner received ten pounds of frozen beef.

They’re brothers. So Keith and Amanda won either way. 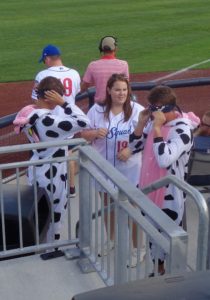 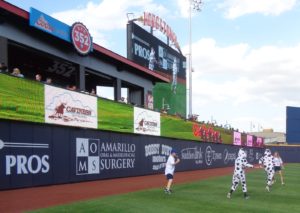 After Paul and Isaac both simultaneously and blindly assaulted the lady in left field, the P.A. announcer declared it a tie and we walked out of there at the end of the night with a 7-0 Sod Poodles win and a box of fresh regional ground beef. Only in Amarillo! 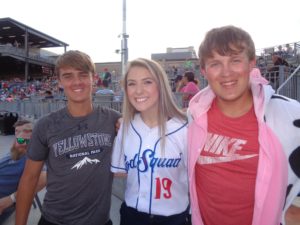