We’re all guilty. We’ve all lived Act Two of the Story of God, personally and corporately. We have all sinned and fallen short of God’s glory. We’ve all taken huge bites out of that apple. 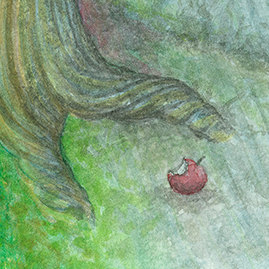 So, how bad can it be? Well, immediately after committing that first sin, we see Adam and Eve avoiding God. They’re actually hiding from God. They’re afraid of their good and loving Creator. They make excuses. They blame each other. They blame God. Nobody confesses. They don’t admit anything. Because the relationships have been busted. The trust, the communion, is broken. And the consequences are dire. And immediate.

Because of the sin, there is now going to be constant struggle between the snake and the humans. Always strife. Always conflict. Always treachery and hate. Because of the sin, the man and woman are no longer equal partners. Their community has been wrecked. The woman now wants to control the man, the man now wants to dominate the woman. Always strife. Always conflict. No peace. Very little trust. And the ground isn’t friendly anymore. Nothing’s going to be easy anymore. The earth is now fighting back against the humans. No more cooperation. All of life is now a struggle to survive. And they won’t. They’re going to die. You sin, you die.

The worst part is that the people are thrown out of the garden. They are driven away from the presence of God.

“The Lord God banished them from the Garden of Eden… After he drove them out, he placed on the east side of the Garden of Eden cherubim and a flaming sword flashing back and forth to guard the way to the tree of life.” ~Genesis 3:23-24

The overwhelming result of sin is not the loss of the garden, it’s the loss of God. The humans are no longer in his face-to-face presence. That’s the tragedy. Throughout the whole rest of the Old Testament, you never hear the people dream of regaining the Garden of Eden. They don’t long for those comforts and luxuries. They talk about regaining access to God’s presence. They dream about and prophesy about and wonder about once again being allowed into the presence of God.

We have traded trust and obedience to a gracious and friendly God and the intimacy of living in his presence for chaotic misery and isolating independence. It’s a horrible transaction.